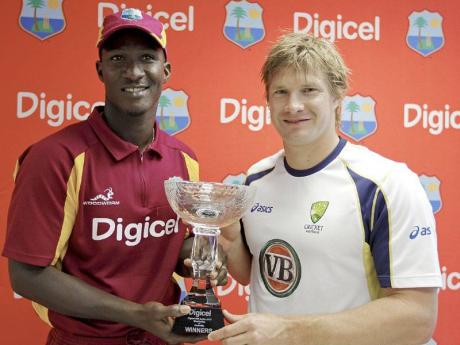 West Indies captain Darren Sammy (left) and Australian skipper Shane Watson pose with the trophy of the 2012 Digicel One-Day International (ODI) series during the media launch in Kingstown, St Vincent, on Wednesday. Australia and the West Indies square off in the first of five ODI cricket matches today. - AP

Yesterday, the side put the finishing touches on their preparation for the 9:30 a.m. (Eastern Caribbean time) encounter at the Arnos Vale Stadium, confident they can strike first blood in the series.

However, the Windies will have history against them as they have failed to get the better of Australia in their last 10 ODIs dating back four years.

Two years ago Down Under, they lost their five-match series 4-0, and back in 2008 in the Caribbean they were swept 5-0.

Despite the enormity of the task ahead of West Indies, captain Darren Sammy said the confidence in the side would play a crucial role.

"We have to believe we have it in us to win. We will look to hit the ground running and start the series on a winning note," Sammy said.

"Arnos Vale has been a good venue for us. The last time we played here we won the matches and we enjoyed the crowd support from the fans here, and the atmosphere at this venue is always superb."

He added: "We are playing against the Australians, and everyone knows they are a good team ... a very competitive team. But we are focusing on us and what we have to do.

"We have a young team but we are a team hungry for success. They are several young players in the squad, who are new to the international stage."

Experience could also be a key factor in the series as Sammy leads a relatively novice group, with all-rounder and vice-captain Dwayne Bravo the most seasoned campaigner in the side with 117 matches.

While West Indies will look to his experience, they will also pull on the talent of elegant left-hander Darren Bravo, the resurgent Marlon Samuels and the big-hitting Kieron Pollard to boost the batting.

In the bowling, West Indies will miss speedster Fidel Edwards and the ill Ravi Rampaul but will look to recalled pacer Tino Best, fellow Barbadian speedster Kemar Roach and Sammy himself to provide seam options.

Australia, meanwhile, have been hit by the loss of seamers Ben Hilfenhaus and James Pattinson who have both been ruled out of today's game.

Hilfenhaus is down with a virus while Pattinson has not yet recovered from the injury he arrived with.

This means veteran campaigner Brett Lee and Clint McKay will lead the pace attack, with captain Shane Watson and Dan Christian chipping in.

Australia are mulling over playing both left-arm spinner Xavier Doherty and off-spinner Nathan Lyon in today's opener, a move Watson said he was keen on.

"They have a chance because they did a brilliant job in the last game in Adelaide especially," Watson told reporters.

"For me as a captain it gives me plenty of options when you do have two spinners of that quality."