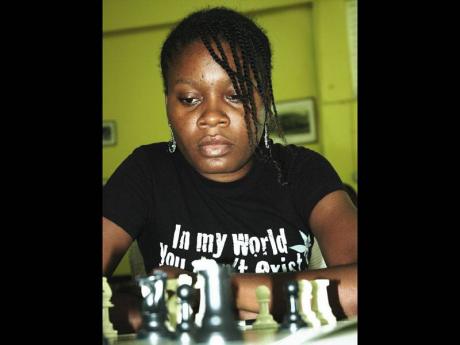 Women's Fide Master (WFM) Deborah Richards returned from one week of game play in the subzonals in Ecuador last weekend a stronger player, even though she did not win.

"I believe that this tournament was most certainly one of the most productive tournaments I've had in many years. Not only am I more knowledgeable as a player but psychologically I have grown tremendously as well," said WFM Richards.

The most important way to improve chess is to play competitively, since chess competition experience cannot be simulated. WFM Richards, a graduate of Wolmer's Girls school who has won the Jamaica National Women's title for 10 consecutive years, seems to echo this sentiment.

WFM Richards, the only WFM in the English-speaking Caribbean, after nine rounds in the Ecuador subzonals, ended on a respectable 4.5 points from nine games and placed 10th from a field of 20 players. The subzonals is a qualification tournament for the Women's World Championships in 2013.

While proud of her result, the goal was to win the tournament.

"I played some good games, and I did the best that I could under the circumstances and with the resources that I had during and before the tournament. So I give myself an eight out of 10," WFM Richards said.

This is the second time WFM Richards has played in a subzonal tournament and she believes the difference between her and the field of 19 other players she was up against last week was competition exposure.

"If I had got in at least 20 games under similar tournament conditions within the three months leading up to the tournament, I would have performed much better," she said.

The most challenging of her nine games was against the tournament winner, WIM Carla Heredia Serrano from Ecuador, whom she faced in the last round.

"I ended up in a very unfamiliar position very early in the game, and after three hours of playing we were both in time trouble in a difficult position. By three and half hours, we were both still in time trouble. It came down to a somewhat equal yet unbalanced position whereby I had a bishop and a knight for a rook. A few minutes later, I lost on time. It was a good game but I think physically I was worn," WFM Richards noted.

Next stop for WFM Richards will be the National Chess Championship [Open] in April when she will play against the strongest field of Jamaican players. She will not defend her Women's National title this year as the Women's National Tournament will run concurrent to the Open. The aim for all players in this tournament is qualification for the Olympiad teams for Turkey this summer.

Next week, we will begin the profiles of the players competing in the National Chess Championships.

The National Junior Champion-ships ended last week with the crowning of Krishna Gray as the new under-20 champion for girls. The Open section finished with a tie between Stuart James and Tewana Mellace, who both ended on 6.5 each from seven games. Mellace and James will play off this weekend to determine the single champion for the Open section.

More from the official rules of chess: Rule 4.1 - Provided that he/she first expresses his intention (for example by saying 'j'adoube' or 'I adjust'), the player having the move may adjust one or more pieces on their squares.

March 24: The Queen's Prep one-day chess tournament at The Queen's School. Deadline for entries is March 21.