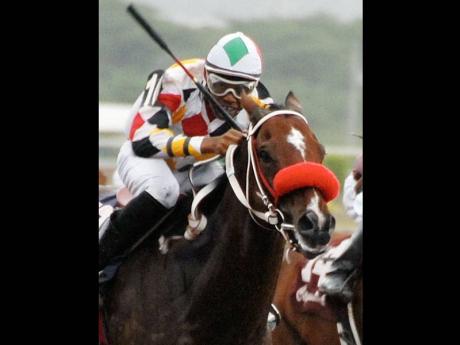 Apprentice Jevvanne Erwin, who rode BUSY in the second race at Caymanas Park on Saturday, was slapped with a 15-raceday suspension by the stewards on Tuesday for his failure to persevere with his mount.

BUSY, who was unfancied to the tune of 83-1, finished 12 lengths sixth in a field of seven, as highly fancied WINNIANA won the 1100-metre race convincingly.

In addition to the suspension, which takes effect on Saturday, March 24, Erwin was fined $10,000. He has so far ridden seven winners this season to be eighth in the standings.

At the same hearing on Tuesday at the Winchester Road offices of the Jamaica Racing Commission, former champion jockey Trevor Simpson, who rode the disqualified winner FIRST 'K' BOY in the fifth race last Saturday, was suspended for five racedays.

This resulted from the interference caused to DARCAS ARMANDA, long-time leader CANNTARRA and POCKET ACE (awarded race) when taking over the lead (running down sharply to rails) approaching the furlong pole. Simpson's suspension takes effect on March 24.

Apprentice Jodeien Anderson, who rode YES WE WILL in the eighth race won by AWESOME MARQUE on March 3, was suspended for one raceday and fined $2,000 for the interference caused to ERGASIA leaving the 900-metre point. His suspension embraces the midweek meet of March 28.

Jockey Chris Douglas, who rode KISSING CHRISSY in the ninth race on Saturday, March 3, was fined $3,000 for the excessive use of the whip. His explanation in respect of the interference caused to ONELITTLEWISH shortly after the start was accepted.

Dancel was also fined $10,000 by the stewards for his ungentlemanly conduct after riding ERGASIA in the eighth race on Saturday, March 3, when he had heated words with another apprentice, Jodeien Anderson, who rode YES WE WILL in the same race.