Fuller under fire after seeing red 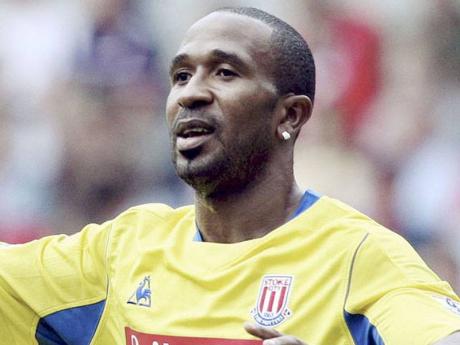 Reggae Boy Ricardo Fuller has come under fire from Stoke City boss Tony Pulis, after he was sent off for a stamp on Chelsea's Branislav Ivanovic in an English Premiership encounter last weekend.

The temperamental forward, making his first start for Stoke in over a year, got his marching orders in the 24th minute for his reaction to being tackled by Ivanovic.

"It's a ridiculous reaction from Ric and just goes to show how stupid he can be at times. Ivanovic does catch him, but you can't react like that," Pulis said.

"He's let himself down. It's unacceptable, but straight after the game Ric was the first to apologise in the dressing room."

It was the sixth time Fuller had been sent off in his career and with his contract at Stoke up in the summer, the incident cast some doubt over his future at the club.

The 32-year-old has been one of Stoke's finest players in recent years since arriving at the West Midlands club six years ago, a fact that Pulis was quick to acknowledge.

"He's been a great player at the football club and is a lovely, lovely lad who I have a lot of time for. But for some reason he snaps easily. Who knows what goes on in his head?" Pulis lamented.

"He is one of the best players we have had in lots of respects. Technically, physically, he is a powerhouse when he plays and I have got a lot of time for him. But if you look at his record, he has got that in him."