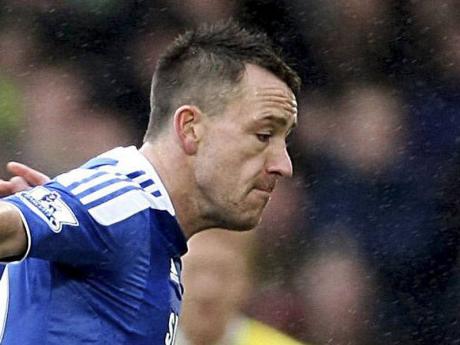 LONDON (AP):Chelsea can take another step to reviving what had looked set to be a disastrous season when they host Leicester in the quarter-finals of the FA Cup on Sunday.

Two weeks ago, Chelsea were struggling in the cup, appeared to be on the verge of Champions League elimination and their hopes of finishing in the top four of the Premier League were fading after one win from six matches.

But three straight wins have lifted morale and put the west London club back in contention for all three competitions, with only second-tier Leicester now standing in the way of a Wembley semi-final appearance.

"We proved we're a team and that's what we're all about," Chelsea captain John Terry said. "That togetherness when it really mattered showed what Chelsea are made of.

"All we can do as players is stick together and do what we do best, which is playing football and winning football matches."

Liverpool host Stoke in Sunday's other quarter-final, while Everton are at home to Sunderland tomorrow when Tottenham take on Bolton in north London.

Chelsea's firing of coach Andre Villas-Boas following months of reports of clashes with players seems to have rejuvenated and bonded the squad, which immediately beat Birmingham in an FA Cup replay, Stoke in the Premier League and Napoli in the Champions League.

"The only way to answer it is to win games and play well and we've done that," midfielder Frank Lampard said.

Chelsea have won their last five meetings with second-tier Leicester, scoring four goals in each of the last two, and is now a strong contender for a fourth FA Cup win in six seasons.

After scoring in the 4-1 win over Napoli, Didier Drogba look set to continue up front in place of Fernando Torres, who has just five goals in 50 appearances since joining Chelsea in January 2011.

Torres' former club, Liverpool, is aiming to add a first FA Cup title since 2006 to the League Cup it won in a shoot-out last month.

Only Arsenal and Manchester United have won the FA Cup more times than Tottenham but the last of Spurs' eight wins was 21 years ago and they need to put a Premier League three-game losing streak behind them to overcome Bolton.

"It's a massive game for us," Tottenham winger Gareth Bale said. "We know our league form hasn't been great of late, but the FA Cup is a different competition and, being at home, we've got a great chance to get to the semi-finals."

There are only four Premier League games scheduled for the weekend, with Swansea at Fulham and West Bromwich Albion at Wigan on Saturday.

Defending champions Manchester United can temporarily stretch their lead over City to five points if they win at Wolverhampton Wanderers on Sunday, when Newcastle host Norwich.

City's match against Chelsea has been rescheduled to Wednesday because of their opponents' FA Cup commitments.