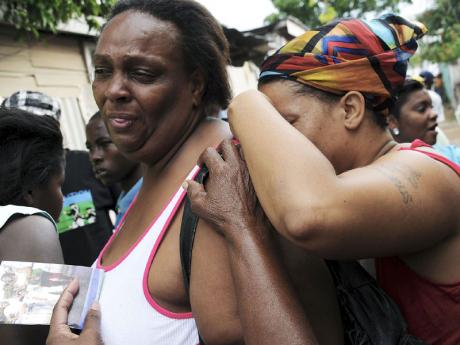 Two women came to tears after 45-year-old Dianne Gordon was shot dead at her gate in Cassava Piece, St Andrew, early yesterday morning. The residents say the police came in the area and start shooting when Gordon was killed. - Norman Grindley/Chief Photographer

Residents of the community are mourning the death of the 45-year-old office attendant, who they say was killed by police early yesterday morning.

Gordon lived with her husband, Hugh Collins, and two daughters. She was returning from a wake in the community where she had brought rum for the mourners. At least one bullet hit her in the head.

The residents' main concern is now for Gordon's younger daughter, who is scheduled to sit the Grade Six Achievement Test next week. They are certain she will not be able to cope.

Collins could barely explain what he knew. He was also at the wake but left about midnight.

"Mi leave before har and come in a watch TV and mi hear di gunshot dem. A when mi come outside, mi see seh a she," he said, leaning against a fence for support.

Investigators from the Independent Commission of Investigations (INDECOM) were on the scene at approximately 3:30 a.m., according to Senior Public Relations Officer Kahmile Reid. She said all nine policemen who were allegedly involved in the incident were from the Constant Spring Police Station. Reid said the police's account of the incident was that they were greeted by gunfire when they entered the community. The police said they were acting on information that gunmen were in the area.

But residents are refuting claims of a shoot-out. They say the wake was for a 13-year-old, and that the lawmen fired aimlessly, picking up their spent shells after. They showed us the gate to Gordon's yard that was full of holes.

"We have notified them that they need to come in to INDECOM or we go wherever they are to take their respective statements," said Reid.

INDECOM says Gordon's killing is the 24th shooting death by the police that the commission is investigating for March.

Residents say Gordon was a quiet woman who merely went to work and then back home.

Police chaplain Assistant Commissioner of Police Gary Welsh was on hand trying to calm residents. Meanwhile, Member of Parliament for North Central St Andrew Karl Samuda charged that the police should have been more careful.

"The firing of high-powered weapons at close range in these communities is absolute madness. It seems, unfortunately, that this is a pattern of behaviour that has emerged," he said, referring to recent shooting incidents involving the police. He questioned the methods and training of the lawmen and vowed to follow the case through to its end.

"Unless the police has hard, cold evidence as to the reason they discharged their weapons, then the full weight of the law must be brought to bear on them. I won't rest until I get a full explanation on this. A full, detailed report has to be presented. It will not be forgotten," he said.