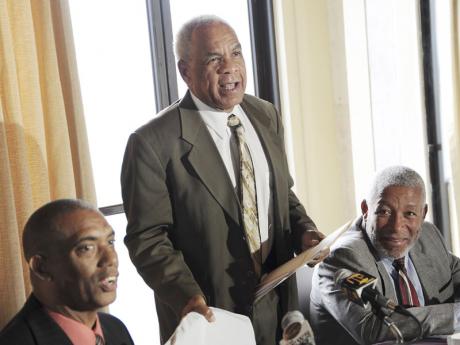 From left: Chairman of the Jamaica Urban Transit Company (JUTC) board, the Reverend Garnett Roper, and Dr Omar Davies, minister of transport and works and housing, address the media yesterday at a press briefing held at the Terra Nova Hotel in New Kingston. Also participating in the discussion is Rear Admiral Hardley Lewin, managing director of the JUTC.- Ricardo Makyn/Staff Photographer

THE NEW board of directors for the cash-strapped Jamaica Urban Transit Company (JUTC) will not consider requesting a fare hike as part of the immediate plans to increase revenue.

"When we have got to that point where we are in a stable financial situation, we may come to the Government at that time and say, 'Listen, in order for the subsidy not to be sporadic, we need a fare increase'," Roper told The Gleaner yesterday.

"Until we use what we have effectively, we should not punish the commuting public any further," he added.

In a report tabled in Parliament last month, Auditor General Pamela Monroe Ellis revealed that for the financial year 2009-2010, the JUTC recorded total losses of $2.2 billion resulting in an accumulated deficit of $8.3 billion as at March 2010.

Roper said the JUTC is now moving 55 per cent of those persons who use public transportation, but added that several initiatives would be put in place to push that number to 80 per cent.

Transport Minister Dr Omar Davies, who met with the members of the new board yesterday, disclosed that the JUTC required 425 buses daily, but said the current fleet was fewer than 300.

The JUTC has 291 buses that are in varying stages of disrepair, but Davies said Cabinet has provided $45 million to ensure that those that only require spare parts or tyres could be put back in the fleet.