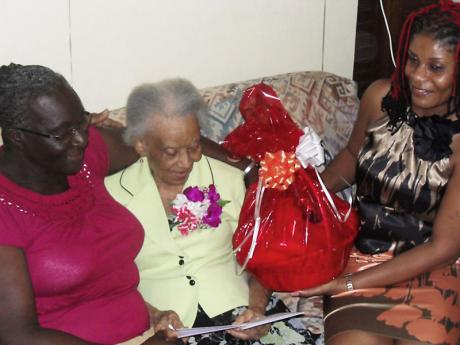 Aunt Ivy reads one of her birthday cards under the watchful eyes of grandniece Olive Walker (left) while Karlene McLymont, who she raised, waits to present her with a gift basket.- PHOTOS BY KAREN SUDU 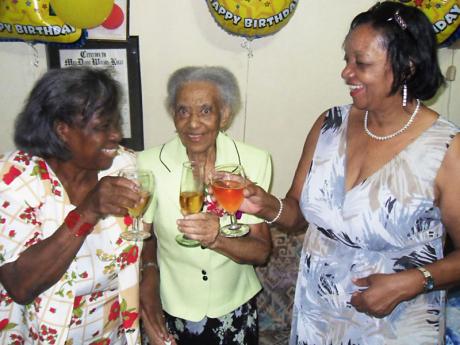 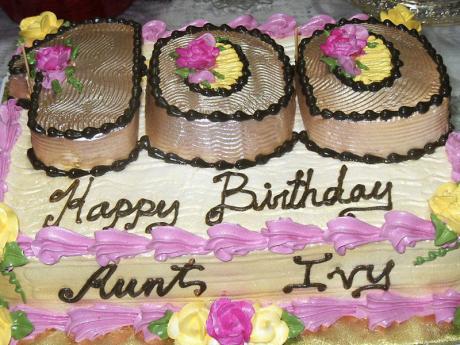 ROSE HALL, St Catherine:IT WAS an intimate affair, and by the time her birthday party ended, Ivy May Willis made sure everyone who attended left reciting the day, month, year, time, community and parish, she was born like a poem, as the vivacious senior repeated it every chance she got: "Sunday, March 10, 1912 at 2 p.m. in Portland Cottage, Clarendon."

Willis was a picture of joy as she greeted those who came to celebrate the milestone at the residence of her niece, Daisy Wilson-Kelly in Rose Hall, St Catherine, on March 10.

The function was interspersed with telephone calls from local and overseas-based family and friends, who were unavoidably absent, but phoned to extend best wishes. While the glowing tributes delighted Aunt Ivy, as Willis is affectionately called, she was even more gleeful when her niece Eileen Clemetson read a letter from Governor General Sir Patrick Allen.

"There is no doubt that you have many wonderful memories and experiences on which you can reflect and which will provide encouragement and endearment for those with whom you share," wrote Sir Patrick.

The senior, who has a passion for dressmaking - a skill learned from her mother, has no biological children, although raising many, earning her the title of model mother.

In 2005, Willis relocated to Portmore, St Catherine, to live with her niece, Jean Willis, who she raised from she was two years old until 18, when she got her first job away from home.

In her tribute, an emotional Jean reflected on the life of a woman who nurtured her and ensured that all her basic needs were always satisfied.

"She was a very good dressmaker and most of us were totally supported by her earnings. She is kind beyond words and made great sacrifices in order to supply our needs," the niece shared with the audience.

She highlighted that Aunt Ivy's love was not confined to humans.

"Aunt is not only a lover of children and people, in general, but she also loves animals and birds," Jean reflected. "Her yard was like a mini-farm with goats, pigs, dogs, chickens. As a child, part of my job was to carry water from the well for household use and for the animals," she added.

Like her sister, Wilson-Kelly also had fond memories of the affable senior who was an Anglican worshipper in her earlier years.

Prior to the start of her party, Aunt Ivy shared some of her fondest memories of her days at Portland Cottage Elementary School and the three years she performed secretarial duties at the Folly Point Lighthouse in Port Antonio, Portland.

The articulate senior stated categorically that as an adult, she was never interested in getting married.

Now, the centenarian who also cultivated and peddled a variety of crops to complement her sewing, says she has no regrets.

"If I never look after them, I wouldn't have nobody to look after me now. They treat me very good," she smiled satisfactorily.

Reading the Bible is part of Aunt Ivy's daily activities and she often does so without glasses. She now worships at the Philadelphia Assembly in Kingston.