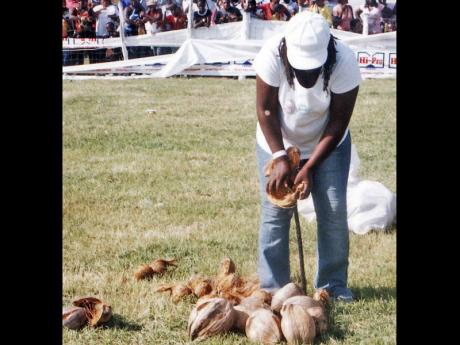 Coconut husk, seen in this file photo, is used in growing ginger.

ORANGE RIVER, St Mary:ALTHOUGH AGRICULTURE Minister Roger Clarke recently charged that the country must do more to reduce the high levels of imported agricultural inputs, Sylburn Thomas of the Export Division is defending the use of the imported coir that, he said, was mixed with the local type.

He explained that coir purchased from St Thomas and St Mary last year did not meet the required specification, noting that at 60 per cent dust and 40 per cent straw, it was less than ideal for use as a planting medium for ginger, compared to the 80 per cent dust and 20 per cent straw ratio of the imported kind. No scientific evaluation of the local type was done, but a visual inspection suggested that the straw component was too high, according to Thomas.

He explains the importance of the lower straw ratio: "When the straw is being broken down, the bacteria will absorb nitrates to be used in the decomposition. That nitrate is not available to the plant, so you will have to increase the proportion of nitrate to compensate, and so we are looking for 80 per cent with dust and 20 per cent with straw.

"What we usually do is give a signal to the marketplace and hope for private companies to take the lead. We're creating an opportunity for some private company to come on board," Thomas told The Gleaner.

However, St Thomas businessman Carlton Bromley, who has supplied coir to the ministry of agriculture, told The Gleaner that the quality of his coir is up to standard, but there has been a serious fall-off in sales. He sells the straw and dust as separate items or mixed, according to the dictates of clients, with most of the dust used by exporters to package yams, dasheen, coco and other crops.

In fact, Bromley says he has never had complaints from the ministry about the quality of coir sold to them.

"I sell them, but it was in last year and them tell me that it work quite okay," he disclosed.

He went on to charge that clients are biased against local producers, always trying to beat down their prices, with no regard to the cost of labour and other inputs. At $300 per feed bag for the dust and $250 a bag for the straw, he thinks these prices are more than reasonable, but charged that foreign-minded business people tend not to value local expertise.

"I have to buy the bags, gas oil, coconut husk, other inputs and pay workers so when I check it out, I cut it right down and couldn't sell for less than $300."

Bromley, who says he has been in the business for quite some time, says he did a thriving business manufacturing floor mats but had to shut down that operation due to the increased competition from exports.

Meanwhile, the Coconut Industry Board is looking to partner with someone who can use the large volume of green jelly coconut shells churned out each day for use in coir production.

"In order for you get coir, it has to be dried. The problem is that most of the machines they are manufacturing now can't use the green nuts because it will clog it up. We dispose of about 3,000 jellies per day, just throw it away. I am saying that if I could find a machine that could process that jelly husk, it would help me a lot as another value-added product," General Manager Yvonne Burns told The Gleaner.