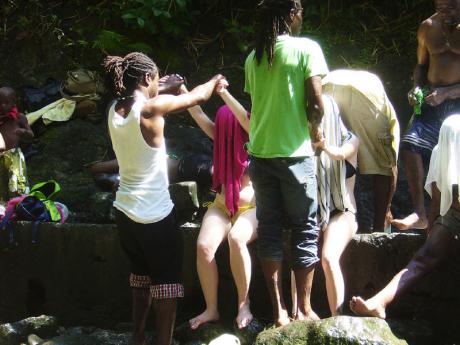 Two Canadians from Toronto getting some 'spa' treatment at Bath Fountain, St Thomas, on Ash Wednesday.- photos by Paul Williams 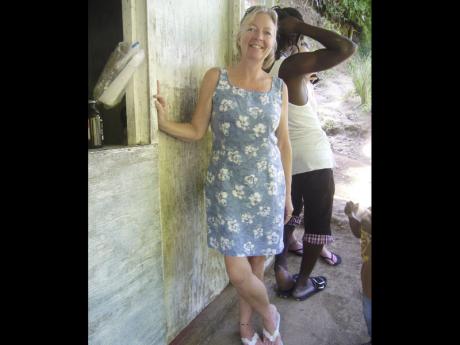 Kelly Wilson, a Canadian living in York, St Thomas, relaxes after getting treatment in the Bath Fountain outdoor 'spa' on Ash Wednesday.
1
2

BATH, St Thomas:THEY GO to work every day to heal the lame and the wounded, and to soothe the weary, stressed and depressed. Some of them are on spot as early as 7 o'clock, ready to attend to their clients and 'patients'. But they are not medical doctors, psychologists, psychiatrists, or trained physiotherapists; they are the 'masseurs' of Bath, St Thomas.

For years, they have been offering their services to people from all over the world who have heard of the therapeutic properties of the piping hot water that seeps from the rock in the hills. On Ash Wednesday, when The Gleaner visited, there were many local visitors and several from overseas. The masseurs were also out in full force. And it was brisk business, with people soaking up the service and the hot water containing calciun, magnesium, sodium, sulphate, silicate, chloride, etc.

Kelly Wilson, who is a Canadian living in York, St Thomas, and a regular patron, said, "It is a natural Jamaican experience. This is the place to come. It is not pretentious, it is not the type of experience that you get anywhere else in the world." Also in attendance were Wilson's niece Jamie Iverson and her friend Stephanie Ocoin from Toronto, Canada. They both thought the service they got was great. Ocoin believes a spa treatment such as the one she got from masseur Patrick is a luxury back home.

Wilson herself said her treatment was good, but she said the approach from some masseurs could be "a bit intimidating to some people". "I am used to it, but some other people might find it distasteful," she said. The persistence of the masseurs can be very overwhelming. And they don't discriminate - a client is a client, a potential source of income. They don't take no for an answer easily. Sometimes some people just give up and give in and let the masseurs do their job, and invariably, they are satisfied.

Patrick is aware of the concern that some people have as it relates to the jostling for clients, and he and several others would like a more structured operation among the masseurs. "This place is nice and it entertain people to the highest level, but we need a whole heap a groundwork so that people can feel more relaxed and better approached. We want to change the juggling pattern, the juggling pattern is what run away the people," he said. But while they would like outside help, they would have to create the foundation for any assistance by getting organised.

He said the masseurs need to be properly attired and identified, and that the noise and confusion that sometimes occur because of the hustling is not acceptable. The hustlers, he said, could work in different capacities, areas such as groundsmen, trained masseurs, and hosts who meet and greet visitors. This idea was echoed by Derrick Lindo, who wishes to be a certified masseur.

Some people, especially those in the know, say most of what these youths do is not massage in the real sense of the word, and that the youth are just trying a thing, but people who have experienced the spa in the hills have told tales of how relieved, pain-free and destressed they get after a treatment. The testimonies are endless, thus the high number of repeat visitors.

The hotel and the masseurs, over the years, have been having a tense relationship. The major complaint is the high level of overture that the hotel's guests face. Yet, Patrick and Wilson believe that the informal masseurs and the hotel can work together as both serve different purposes, and some people prefer the outdoor charm in the hills to the more formal indoor aesthetics of the hotel.

Patrick believes the hotel must have dialogue with the community and the youths, and work with them instead of seeing them as competitors. "We have the gold spoon inna wi mouth," he said. "And, it is not about just 'eating a food'. It's all about levity to a long term."

A typical treatment involves applying essential oil, stretching, pulling and bending of the limbs, head rubs, slapping of the back and belly, the pouring of the scorching hot water on the head, the scrubbing of the sole with river stones. It may also include covering the body in sulphuric mud, which is obtained from the top of the hill or in the bed of the stream, into which the hot water flows. The stream is aptly named Sulphur River, which meanders at one point below the Bath Fountain Hotel and Spa.