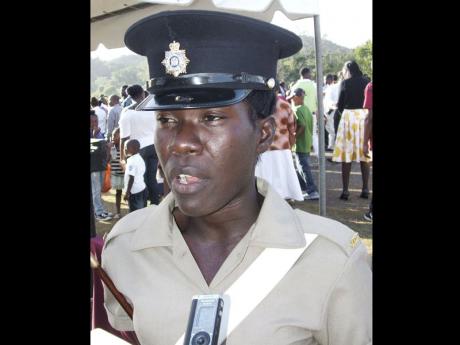 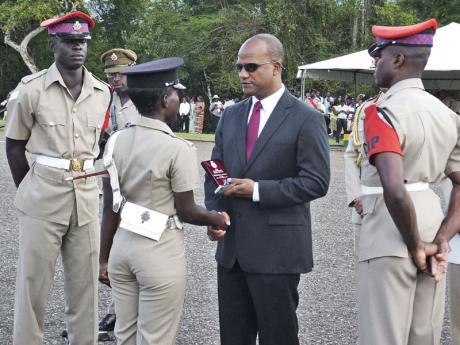 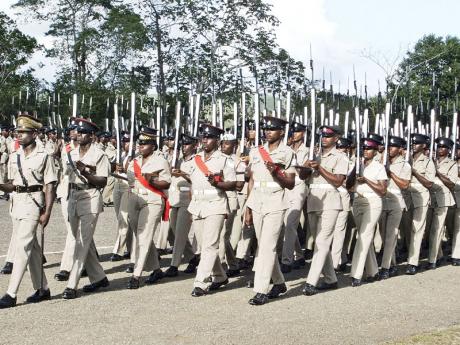 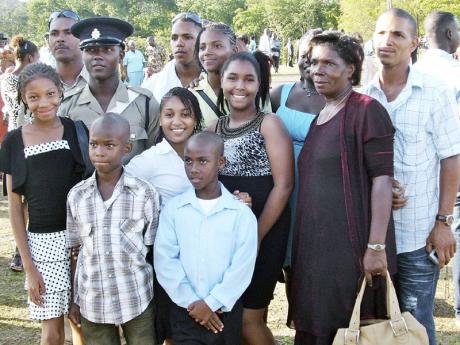 MONEAGUE, St Ann:IT'S AN occasion that scores of families look forward to each year: journeying to the Jamaica Defence Force (JDF) training camp in the cool hills of Moneague, St Ann, to watch their relatives emerge as more rounded and disciplined individuals after a period of intensive training.

All parking spaces are usually taken, as was the case last Saturday, as dozens of buses, crammed with well-wishers, travelled from all parts of Jamaica to witness the final phase of the transition of recruits to soldiers after 22 gruelling weeks.

Perched on the hillside overlooking the rectangle that hosted the passing-out parade, just about everyone had a wonderful view. Cameras clicked almost non-stop. Umbrellas shielded some from the scorching three o'clock sun until some clouds made it more bearable.

It was a joyous occasion all around, made even more so by the utterances of some persons.

"Mi cyaa see him!, Mi cyaa see!" one mother cried frantically as the recruits marched up the hill to enter the open area.

"See him deh! See him deh!" a female relative beside her responded, while pointing and trying to steer the woman's view in the right direction.

Joy overcame her, and the brightness of her face almost rivalled that of the sun as she spotted her son in the crisp khaki uniform, marching in unison with the others. And the cameras clicked away.

More was to come. When all 122 soldiers gathered for a group shot for all who cared, one young lady snapped several shots, but somehow couldn't spot her brother in the pictures, try as she might, even though she had spotted him in the group. Frustrated, she finally gave up, hissed her teeth and turned away, muttering: "Anyway, him mus inna it!"

Among the 160 recruits who started the 22-week training programme in October last year was St Ann native, 24-year-old Brown's Town High School past student, Julene Jarrett, who enlisted despite holding a diploma in early childhood education.

Jarrett, now a private in the army after the passing-out parade, not only made the final cut of 122 recruits who completed training, but emerged as top recruit - female.

With her diploma, Jarrett was headed for the classroom while Ellis told The Gleaner he loves the construction industry and would have chosen that field. Their enlistment in the JDF, however, has opened up a world of opportunities that spans over 50 skill areas, which include computer, mechanical, electrical, videography, photography, telecommunications, medical and dental, and even construction, among others.

Jarrett told The Gleaner after the passing-out parade: "If I wasn't in the army, I would definitely be teaching. But I chose to become a soldier because I find it very fascinating. Also, I want to serve the people of Jamaica as a member of the Jamaica Defence Force and to help quell crime and violence."

Already, she has benefited from the experience of being in the army as she has learned something new: how to swim.

"I could not swim, I was a non-swimmer, but within two weeks, I managed to get past it and was successful. I had a fear at first, but then I managed to get over my fear and get on with it," Jarrett said.

On being top female recruit, she said: "To be the top female recruit, it's tremendous! I had to work really hard, put out the best, while being a role model for others to see and also to help motivate them. I carried out my duties and met the standards and requirements that enabled me to be in this position now."

The hard course has also taught her another thing: determination. She hopes to use this, among other lessons, to stay atop the field as she charts a career in the army.

Ellis, in the meanwhile, said he followed in the footsteps of an older brother by enlisting in the army. He enlisted on the back of some disciplined upbringing at home, and this helped him to emerge as top male recruit.