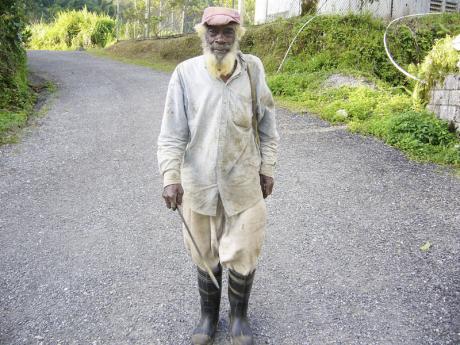 Joseph Smith walking from his farm.- PHOTO BY GARETH DAVIS

MOORE TOWN, Portland:FORCED INTO farming from the tender age of 14, Joseph Smith has remained loyal to his livelihood despite the lack of resources.

The 78-year-old farmer was spotted by The Gleaner making his way home in Moore Town, Portland, having completed a hard day's work at his farm some three miles away in arguably the most remote and rugged terrain of the upper Rio Grande Valley.

"I go to my farm every day. Following the death of my father, I was forced to fend for myself, and although I attended Moore Town Elementary School, I was forced to quit school early as I had to provide bread on the table for my six siblings. Those days were tough, and everyone had to provide for themselves. I struggled, but I am still in farming at Corn Piece and I also do a little backyard farming."

Smith said during the 1960s, 1970s, and 1980s, it was easy for farmers to sell their goods to persons who drove trucks into the area to buy banana, yam, dasheen, callaloo, plantain, and pepper, but over the last 25 years or more, things had taken a nosedive.

According to Smith, repeated hurricanes, compounded by torrential rainfall, have severely damaged the road surface leading into the upper Rio Grande Valley, and many persons have lost crops over the years as a result of natural disasters, which have crippled their livelihood.

But while farming is on the decline in the breadbasket community, Smith pointed out that the high cost of fertilisers, farming tools, and other equipment has dampened the spirits of many farmers, forcing some to take up new occupations.

Smith argued that the Ministry of Agriculture should ensure that emphasis is placed on farming and the industry, instead of just talking about it. He also said farming should not just be a practice, but rather, a way of life, as a country that feeds its people with domestic crops will thrive.

He added: "Farmers are suffering, not only as a result of natural disasters, but also as a result of praedial larceny, which can be very frustrating. We need to be assured that we are a part of the agriculture sector, and not just individuals who plant. Some provision has to be made for us as farmers who are unable to find the money to buy fertilisers, chemicals, and any other equipment."