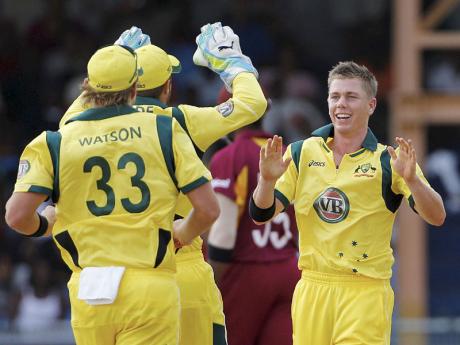 KINGSTOWN, St Vincent (CMC):Spineless batting sent West Indies crashing to yet another defeat here yesterday, as they lost the opening one-day international (ODI) of the five-match series against Australia by 64 runs at the Arnos Vale Stadium.

Chasing a moderate 205 for victory on a slowish track, West Indies capitulated from 97 for three in the 24th over to 140 all out off 32.2 overs, to extend their wretched run against the rampant Aussies.

The Windies were making a fight of it when Marlon Samuels (35) and Dwayne Bravo (32) were engaged in an exciting 64-run stand for the fourth wicket.

However, both batsmen fell in the space of four runs with no runs added as the hosts lost six wickets for seven runs, with left-arm spinner Xavier Doherty, who claimed four for 48 and seamer Clint McKay, with two for 22, destroying the middle and lower order.

Not even a frenetic 20-ball 35 from Darren Sammy, in a 36-run last-wicket stand with Kemar Roach (one not out) could rally the West Indies at the end.

West Indies have now lost 10 of their last 11 ODIs to Australia.

Earlier, the Windies were handed a golden opportunity to start the series with a win when their bowlers produced a magnificent effort to limit Australia's dangerous batting line-up to 204 for eight off their 50 overs.

Medium pacer Dwayne Bravo, playing in his first match for the Windies in nearly a year, finished with three for 58, but it was the off-spinning duo of Sunil Narine and Marlon Samuels that put the brakes on the Aussie scoring.

Narine was outstanding in taking one for 24 from his 10 overs, while Samuels snared two for 29 from his eight.