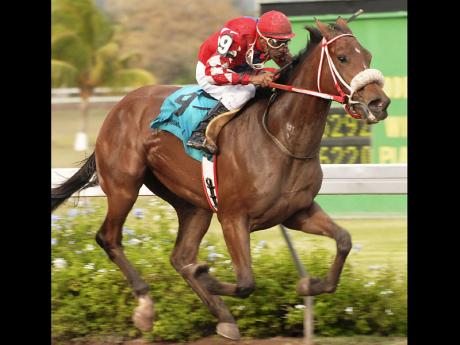 The final prep for the 2000 Guineas to be run on April 9 (Easter Monday) is on at Caymanas Park today, with 10 colts and geldings declared for the 21st running of the Prince Consort Stakes over 1400 metres.

A notable absentee from the field is the Supreme Ventures Jamaica 2-Y-O Stakes winner, ALL CORRECT. The bay colt from the stables of champion trainer Wayne DaCosta was one of the original 14 entries when nominations closed last Saturday, but was withdrawn at the overnight stage on Wednesday.

As a result of ALL CORRECT's defection with topweight of 57.0kg, the scales has been raised 1.0kg with Ian Parsard's POTCHEEN under four-time champion jockey Omar Walker now carrying topweight.

DaCosta still has a worthy contender in stable companion ITALIANO, an upset winner ahead of LASHING FORCE in the February 25 Sir Howard Stakes over 1200 metres.

The roan colt faces more by way of competition with the likes of PRINCE ANDREW, UNCLE DONNY and POTCHEEN present. But he will welcome the additional furlong and, having secured a favourable draw on the outside, could make it close with leading jockey Dane Nelson riding him from the convenient mark of 53.0kg.

With the useful POTCHEEN having to give weight all around, it is doubtful whether he can upstage either PRINCE ANDREW or UNCLE DONNY, the two I am expecting to fight out the finish.

When both last met over this trip on January 28, UNCLE DONNY responded to a strong ride from champion jockey Dick Cardenas to beat the Philip Feanny-trained PRINCE ANDREW by three-quarter length in a driving finish.

PRINCE ANDREW's defeat could be attributed to an indifferent ride from the sparingly used lightweight jockey Peter Bryan, who looked saddle rusty against Cardenas in the last furlong.

PRINCE ANDREW subsequently came back to win very easily over 1600 metres (in fast splits), with leading all-time jockey Winston Griffiths replacing Bryan; and having worked brilliantly in preparation for this race, should prove a different proposition.

The Dayton Flyer-Quick Burst offspring has won twice from only four starts, and judging from his last run, which saw him clocking a 1:12.1 split on the lead for the first six furlongs, should be in front from early and is preferred to the Anthony Nunes-trained UNCLE DONNY, who has also looked sharp at exercise and will only go down fighting.

Other firm fancies on the 10-race programme are the recent runaway winner GHOST RAPPER to repeat in the second race over 1600 metres; PRINCE ROHAN (working well) to catch TURBINE in the fifth over 1800 metres; RAISE YOUR GLASS in the sixth; RIFLEMAN ahead of STOCK MARKET in the eighth; and STAR RULLAH in the nightpan.