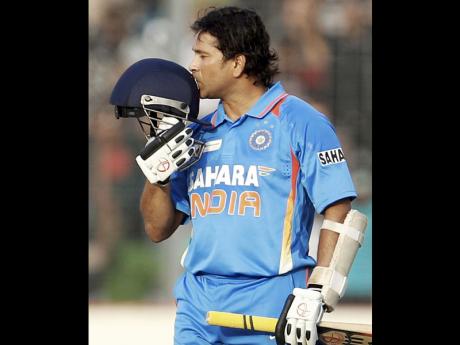 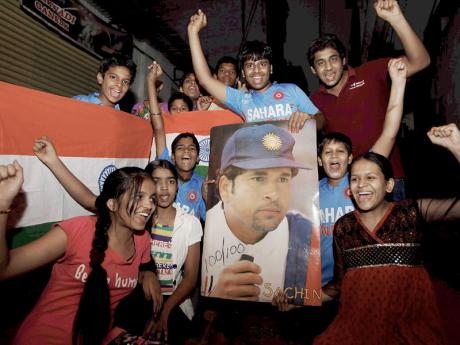 DHAKA, Bangladesh (AP):Sachin Tendulkar achieved a milestone unlike any cricketer.

The historic journey to his 100th international century yesterday took longer than expected, being stranded from the unprecedented mark for just more than a year.

But the 'Little Master' made the mark in the Asia Cup at Mirpur Sher-e-Bangla National Stadium for the highly anticipated cricket achievement.

"When I got the 99th century, no one spoke about it," he said. "I guess it was the media which started it. Everywhere I went people were talking about my 100th hundred."

Tendulkar got to his 49th one-day international century and first against Bangladesh with a clipped single to square leg off spinner Shakib Al Hassan. He did not celebrate much despite the mounting pressure of expectations from millions of his Indian compatriots.

"I can't think of anything at this stage, it has been a tough phase for me," Tendulkar told Neo Cricket channel after his innings. "I started off the season well, but was luckless. It does not matter how many hundreds you score, you still have to grind it out."

The best batsman of the modern era scored his last century (111) against South Africa at Nagpur during the World Cup on March 12 last year.

The World Cup final at Mumbai and tours of England and Australia all provided him opportunities of getting to the mark at some of the most celebrated venues but Tendulkar came up short each time.

He was twice out in the 90s in Tests last year - for 91 versus England at The Oval and 94 against West Indies at Wankhede Stadium - while also being dismissed for 85 against Pakistan during the World Cup semi-finals at Mohali.

Yesterday, he was finally out for 114, caught behind off Mashrafe bin Mortaza, who then ran over to shake his hand.

Tendulkar has set a benchmark unlikely to be surpassed in his lifetime, with his closest rival, Ricky Ponting, on 68 international centuries and approaching the twilight of his career at the age of 37.

Since his international debut at 16 against arch-rival Pakistan in 1989, Tendulkar has been compared to not only top batsmen of his era like Brian Lara and Inzamam-ul-Haq, but also to Australian great Donald Bradman as the best batsman ever.

Bradman, who retired in 1948 with an average of 99.94 runs, said Tendulkar reminded him of his own playing style.

"Not even Don Bradman carried expectations like this, and Sachin had been bearing it since 1989," former India coach and Australia captain Greg Chappell wrote in his recent autobiography.

Tendulkar already holds most of the major batting records, including most runs and centuries in both five-day Tests and one-day internationals.

He has taken on the best bowlers over the past 23 years, including Imran Khan, Wasim Akram and Waqar Younis during his first tour of Pakistan in 1989, and the likes of Allan Donald, Glenn McGrath, Shane Warne, Courtney Walsh and Dale Steyn over the rest of his career.

The 38-year-old limited his participation in one-dayers since 2010 when he became the first to score a double-century in the 50-over format with 200 not out against South Africa at the Indian venue of Gwalior.

But he remains as energetic as anyone in the field as well as while running between the wickets, and each speculation of an impending retirement is knocked off with a new achievement.

Tendulkar's ability to accumulate runs has not diminished and he has adjusted well to changing times by not only perfecting new strokes like the 'upper cut' and 'paddle sweep' but also excelling in the slam-bang Indian Premier League.

Asked by commentator Ramiz Raja what message he had for youngsters, Tendulkar advised them to follow their dreams. Like he did when he "had to wait for 22 years to win the World Cup".