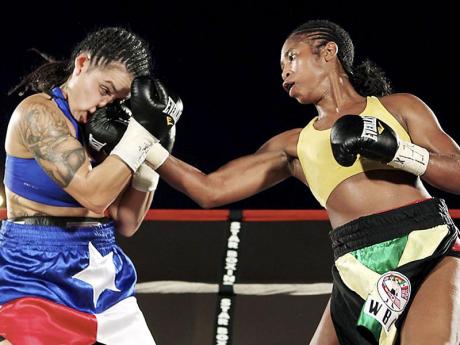 Jamaica's World Boxing Council (WBC) super bantamweight champion, Alicia Ashley, will defend her title tonight in Mexico City, Mexico, against hometown star Maria Elena Villalobo. The fight is scheduled for 10 rounds and will see Ashley making the first defence of the title that she won on July 23 last year by defeating Christina Ruiz.

Ashley has been in Mexico City for over a week to get acclimatised to the altitude. This was a good idea, she told The Gleaner yesterday, because she had breathing problems the first few days. Ashley has now adjusted to the altitude, however, and does not see herself having any problems tonight.

"I will be firing on all cylinders," she said yesterday.

Villalobo, 39, is a very muscular boxer and it is anticipated that she will try to get the champion to engage in close-range exchanges. She has a record of 12 victories, five losses, and one draw, with five knockouts and is called 'Explosive' by her fans.

There is little doubt that she will be trying to get Ashley to engage in a slugfest, as that is when she performs best. She will also be fighting before her hometown crowd, and this will definitely give her a boost as they will be cheering her on wildly from the first bell. She has predicted a good performance and said yesterday that she is confident that she will be the new champion.

Ashley, who is 44 years old but looks at least 10 years younger, has a 17-9-1 record with one knockout. She is called "Slick" because of her constant movement and hard-to-be-hit style of boxing and movement, and the use of her jabs will have to be the major strategic item in her repertoire tonight.

With regard to tactics, Ashley told The Gleaner that her plan is to score quickly and get away from her opponent.

"I will not be getting into many exchanges with her because from watching tapes of her fights, I know that she likes to keep the action close," she said. "I have a plan of action which I hope to execute, and if I am able to, I will be taking the title back home with me," she added.