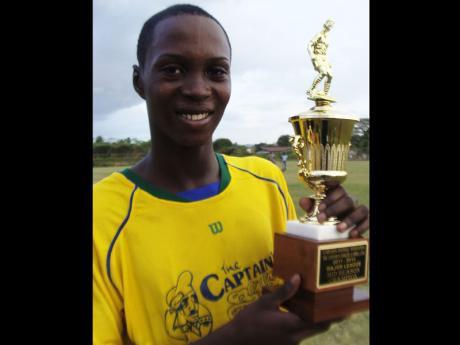 The Clarendon mid-season final last Saturday at the Wembley Sports ground in Hayes was a proud occasion for 16-year-old Rushane Sharpe. A student at Denbigh High, Sharpe scored the extra-time winner for Jamalco to defeat New Bowens 1-0. - photo by Richard Bryan 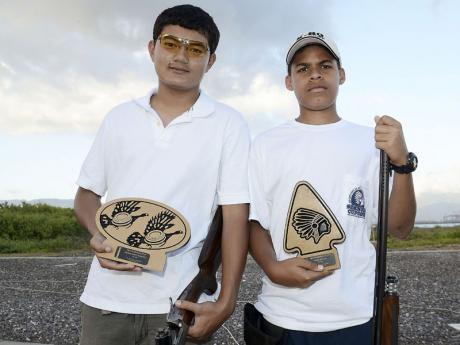 Jamaica's Nicholas Chen (left) and Brandon Reid show off their trophies from the Seminole Cup in Florida.- photo by Gladstone Taylor
1
2

Jamaica shooters from the Jamaica Skeet Club (JSC) based in Portmore pocketed 20 medals in the recent Seminole Cup, a Shotgun tournament in Florida.

Two of the best performances came from 'A' class shooter Robert Reid and junior Nichoals Chen. Reid won in the shooting clay discipline with a top score of 75, while Bruce DuQuesnay shot 72 for third place in the same class.

Meanwhile, 14-year-old Nicholas Chen was the best among the juniors. Shooting in 'D' Class, he snatched two gold and two silver. One of his gold medals was in the main event, which boasts the best shooters.

The other junior, Brandon Reid, placed third in the preliminaries and fifth in the main event. Some of the preliminary round winners include DuQuesnay (87) 'A' Class; and Alexander Lee (74) 'C' Class.

Other notable performances came from Christian Sasso, who placed third in 'A' Class (five-stand), while veteran Joey Chin scored 161 over two days in Master Class to be the best shooter for Jamaica in that class. Master Class is mainly dominated by professional shooters, and some of the best shooters in the world from mainly the United States and United Kingdom usually participate.

Jamaica were at a disadvantage in this class as most locals shoot for recreational purposes and love of the sport.

The Seminole Cup is the largest Sporting Clay shoot held in Florida annually - in February at Quail Creek Gun Club - with over 500 shooters attending each year. The shoot attracts shooters from the colder areas in the United States, as well as some shooters from the United Kingdom.

Second-place Ackee Pod should get the better of eighth-place Passagefort United as the two meet in an Impulse-sponsored Portmore St Catherine Domino League match at Ackee Pod's home ground tomorrow.

Ackee Pod (48 points) are coming off last weekend's morale-boosting 300-286 win over a tough Eradication team and will come into this match with battleground mettle. Passagefort have endured inconsistent form and will have to play their cards right and be consistent if they are to get a sniff at victory.

In other games, leaders Fort International (52 points) should get past 12th-place Spring Village at Passagefort Drive; Caribbean Classic will give Hurricane all they can handle at Portmore Avenue, Portmore Gardens; Black Rooster should beat Westchester on their home ground; Correctional Services will find it difficult to beat Eradication at the Prison Oval; Right Stuff anticipate a win over Colours Sports Bar at Cedar Grove, while bottom club Garveymeade should suffer another loss at home as they welcome Seamaster at the Garveymeade Sports Club.

Zone One leaders Old Harbour New Testament, the 2009 champions, will face off with four-time champs Power of Faith International in a crucial game in the Power of Faith Ministries 20/20 Church Cricket League, this morning at Lime Tree Oval. The game bowls off at 9:30.

Old Harbour lead the zone with maximum 12 points from three games, while PFM International have just four points from two games and cannot afford a loss. They will have to play a near flawless game to get past a strong Old Harbour contingent. Old Harbour will be led by the batting prowess of Andrew Henry, who belted a century (109) and a half-century (63) in his last two games, while their opponents' hopes lie in opener Peter Harrison and wicketkeeper/batsman Glen Wellington.

In the second game at the venue, at 1:30 p.m., PFM Development, currently pointless, are caught in a do-or-die zone two game against Portmore Gospel Assembly (four points). At Bridgeport, Zone one teams Victory Open Bible face their sister church Miracle Open Bible, and the winner of that game will have a good chance of securing a semi-final place, while in the feature at 1:30 p.m., Waltham Park New Testament have a must-win game against Bethel Born Again, who have a win and a loss in two games.

Battle for spots in LIME semis

Four teams will be in the hunt for semi-final spots as the final preliminary games in the LIME Portmore Division Two football league are played tomorrow. Fourth-place East Portmore Portals (19 points) have their destiny in their hands with a win over sixth-place Braeton United (17), who have a mathematical chance of advancing. This game will be the feature match at the Westchester playing field.

In the opening game, fifth-place Daytona (18 points) will have a tough task against already-qualified Westchester at 1 p.m. At Passagefort, third-place Hellshire United (21) only need to avoid defeat against Westport (22) to make it to the next round, while the second game is only of academic interest as Bridgeport and Garveymeade square off at 3 p.m.

Blake, a former champion, had earlier beaten Mystix's Alphanso Stewart 3-1 in the semi-finals to advance, while Lyew ended the giant-killing run of Garfield 'Milligram' Samuels from Rowe's Strikers 3-1 to reach his fourth final in the past seven years.

Lyew was attempting to become the second player in five years to win the singles title twice. However, he suffered an early setback by losing the first two games to Blake, who won the first set 1360-720 and the second 820-nil. However, Lyew fought back strongly in the next two games to level the scores 2-2, forcing a deciding fifth game.

The left-handed Lyew missed a glorious chance to secure his second hold on the Sista trophy, hitting down two pins with the last two balls, allowing Blake to cop the $60,000 prize and Sista Trophy.

Lyew collected $30,000, along with the runner-up trophy, while losing semi-finalists Samuels and Stewart each received $10,000.

Cosmo Grant was returned unopposed as president of the Business House Cricket Association Board at its annual general meeting on Monday night at the Cable & Wireless Sports Club, Chalmers Avenue.

Grant, a former captain of The Gleaner Company cricket team, was re-elected for the fifth consecutive year.

Those elected to the managing committee were Roxvone Stevens, Veviene Daley-Adams, Jowayne Robinson, who plays for Digicel, Ephraim McLeod from Jamaica Broilers, Edward Bailey from Sagicor, and Sellie Mitchell in his capacity as life member.

The competition, which will celebrate its 75th anniversary this year, is scheduled to start in mid-April with four competitions - the Reggae Jammin 50-over league, Best Dressed Chicken 30-over KO, Twenty20 and double-wicket.

National Housing Trust, with national players Nkrumah Bonner, Shacoya Thomas and Bevon Brown, are the defending champions for both the league and 30-over KO competition.

The real campaign for semi-final places in the Jamaica Football Federation (JFF) South Central Confederation Super League football competition begins this weekend with the start of the return legs in two zones.

In essence, it is the search for three places as defending champions Rivoli United, who hold an eight-point lead in the overall standings on Meadows, 10 on third-place Bodles and a whopping 12 on fourth-place Royal Lakes, will be difficult to displace, even if they lose all five remaining games.

Rivoli, who play in Zone A, hold a whopping 13-point lead on New Green and Naggo Head.

Super Action, who have been bolstered by members of STETHS's daCosta Cup team, got their goals from Kevon Farquharson and Deshaun Scott. The second rescheduled encounter saw Downs defeating Monymusk 1-0 on a 45th-minute goal by Jason Jacobs. It was their second straight win, lifting them into ninth on 12 points.

The previous weekend, Kendal were the toast after embarrassing former champions Mile Gully 3-0 in a one-sided mid-season final.

Kendal's loss allowed Mile Gully to extend their lead to two points. Mile Gully were held to a 0-0 draw by the fast-improving Porus FC, who are now joint second with Kendal on 18 points. Villa United, one of the newly promoted teams, continued their creditable run with a 3-1 win over relegation-bound Star Liner.

Matches continue tomorrow with a triple-header at Kirkvine and one game at Brook's Park. To kick off proceedings at Kirkvine at 1:30 p.m., Mile Gully take on Hillstars, while the Comfort vs Georges Valley and Cobbla Gully Strikers vs Porus encounters will be played on adjoining fields at 3:30 p.m. Villa match stride against Kendal at Brook's Park.

Plouden, who hail from South Manchester, are the overall leaders and have mined six points from two wins in as many games in Zone B. Alligator are next on three points from two games, while three teams - Old England, Tri Star and Sunset - are yet to score a point.

May Day's four points from two games are enough to lead Zone A as the pair of Greenvale and Mandeville United have just a point, with Hanbury yet to gain any.

The early going is close in Zone C where after two of the four games to be played, Flava have four points, followed by Hasty Good (three), Mike Town (two) and Allied Youth (one).

Two teams from each zone will advance to the knockout round.

It was the second time time in three games that Treasure Beach were inflicting a 4-0 win. They began the season with a similar scoreline against Longwood. They now have seven points, the same as Real Santa, but have a superior goal difference.

In the feature game of the round, Radcliffe Deidrick's strike gave promoted Division Two champions Real Santa a 1-0 win over Steppers.

Round Hill rebounded from their 0-1 loss to Rocky Hill to spank Haughton 4-1. They now have six points. In other results from the third round, Middlesex and New Holland battled to a 0-0 draw, Rocky Hill and Northampton ended 2-2, while the Longwood vs Prospect game slated for Lyceo was rained out.

Owing to Jamaica's international football game next Wednesday, games originally scheduled that day will be played on Thursday.

Next Tuesday: Haughton vs Rocky Hill at Glen Bromfield playground, New Holland vs Round Hill, Northampton vs Middlesex at Lyceo.

Fresh from their Captain's Bakery & Grill-sponsored Clarendon mid-season final triumph over neighbours New Bowens, Jamalco found life more difficult than expected, kicking off the return phase with a 2-2 draw against Woodhall on Thursday.

Despite gaining one point, Jamaica held on to the lead, keeping their rivals New Bowens at bay, but only by one point. New Bowens, who were three points behind going into last Saturday's mid-season final, kicked off their return phase with a convincing 3-1 win over Rock River.

To emphasise the competitive nature of the league, Four Paths, who lost out on a mid-season final spot after going down against New Bowens in the final encounter, also rebounded with a 4-3 win over Milk River to move to third on 21 points. Milk River are the only team to have beaten Jamalco so far.

Jamalco, who were promoted at the start of the season after winning the Division One, are keen to land the Major League title in their debut year.

Black River's latest win pushed them to 40 points, seven more than second-place Appleton. With just six rounds of preliminary matches left, they can book an early semi-final spot with victory against Parottee on Sunday at New Town Community Centre.

In other results last weekend, Appleton held on to second spot with a 4-1 away win over Knoxwood, Middle Quarters outscored Vineyard 5-2, Burnt Ground won 2-0 over Young Brazil, Tafari Lions edged Braes River 1-0, while it was 0-0 between Parottee and Mountainside.

Crucial points will be up for grabs in the 19th round of the LIME St Catherine Major League today. Fifth-place Christian Pen (22 points), fresh from a 2-2 draw against league leaders Frazer's Whip, welcome another tough rival in Rodwood at their home field as they battle for a semi-final spot.

Rodwood (33 points) are one of two teams to have already qualified for the semi-finals. The other team is Frazer's Whip, who will face fourth-place Portsmouth (23 points).

Other games on today include Dunbeholden vs McCook's Pen at Dunbeholden, third-place D.B. Basovak (27 points) against Wanderers at Homestead field, while second-to-last Tru-Juice (15) will go all-out for a win to avoid relegation, as they face ninth-place Black Lions (16) at Bybrook.