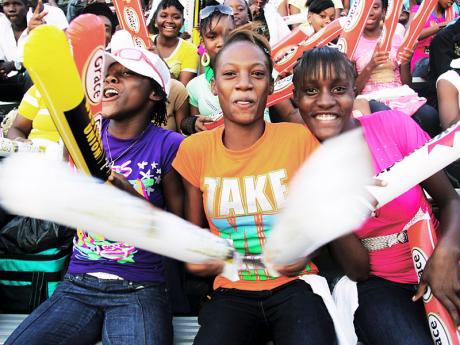 Track and field fans cheer on their respective teams at the annual GraceKennedy Boys and Girls' Championships at the National Stadium.- file

Jamaica has a population of about three million people. Jamaica has only one prime minister, 28 Cabinet ministers and ministers of state, and 63 members of parliament. These are miniscule numbers, a very small percentage relative to the population size.However, I do not think many would argue that because of their small numbers they have little significance, importance, or impact on Jamaica. Some may even argue that a smaller number could have the same or increased impact.

A high school has one principal, a few administrators, and a few teachers relative to the size of the student body. Again, not many would contend that the above-mentioned personnel have little impact on, importance, or significance to the student body or the school. A high school usually has one coach per sport, one head boy or head girl, etc. All of the above, although a very small percentage relative to the school population, play very significant roles in the life of the school.

However, some of the leading figures in the recruiting (importing) of youngsters into our high schools, based on their sporting talent in an attempt to influence the outcome of sporting events, would have us believe that since the number of importees is small relative to the size of the student body, it is of little or no significance. What they are telling us is that since one importee takes the place of only one poor, more deserving youngster based on the normal academic admission requirements of the school, and since said importee frustrates the reasonable expectation of only one struggling, hard-working youngster who has brought his/her standard up to where he/she could represent his/her school only to find that the importee is in that space, and since the readymade 'star' importee is taking from only one powerless, home-grown talent a possible scholarship (Rhodes?), it is of no significance. They would have us accept that the twisted messages they send to our youngsters are irrelevant.

We need to be aware that although the number of importees may be small relative to the student body, they are not necessarily small relative to the size of the team. One importee is approximately 10 per cent of a football team. In recent times, schools have been known to have up to 11 'transferees' (100 per cent) associated with their football team! Who does such a team really represent? Is this in keeping with the spirit of interscholastic sports?

Apart from the win-at-all-costs dogma and the end-justifying-the-means dictum, another of the many unfortunate messages that importation sends to our youngsters is that we can get away with injustices to the poor, powerless, weak, and voiceless. Once we do it to only a few, "a no nuttin". We use them and then rationalise our actions.

Once we institutionalise (make something an established custom or an accepted part of the structure of a large organisation or society), we close our eyes to the injustice and feign ignorance that all is not well. We reinforce the belief that those who follow the rules get shafted and the way out is to beat the system - 'anancyism'. If youngsters cannot count on the integrity of the education system, the academic/technical system which is supposed to be a meritocracy (system based on ability and achievement), on what can they rely?

We need to remember that up to high school level, we are attempting to deliver basic education to a very impressionable group, a large majority of whom come from seriously challenged households. We also need to remember that a large number of these youngsters look to our high schools for guidance and direction with respect to principles, values, attitudes, life skills, ethics, morality, role models, etc, and indeed for a positive transformational experience vis-à-vis the life to which they are accustomed. Much more is expected of the school, especially at this time in Jamaica when so many families face such tremendous deficiencies in several areas of their lives.

We must also bear in mind the enormous effect, influence, impact high school sports and its stars have on students. Sports carries a "big bang". It gets wide exposure and coverage. It is extremely popular. So, youngsters are very tuned in, very sensitive to and very aware of what is happening in sports at their high schools and others. They are not easily deceived. They know the "runnings". Without disclosing my identity or concerns, I have spoken to a number of youngsters in eighth to tenth grades from traditional high schools who have known only this importation regime. To my amazement and surprise, they indicated that their schools import and that they are resigned to living with it although they think it is unfair and wrong.

sports is a teaching tool

I have said it a number of times before and it is worth repeating. Sports in high school, operating within the educational framework, is a teaching aid, a teaching tool, an extension of the classroom, and should be used for the benefit of those who have at least met the normal academic/technical admission requirements of the school.

Sports programmes should work with and develop who they have and not import/recruit sports talent in an attempt to influence the outcome of sporting events. All our youngsters need the enrichment, the help, the widening of horizons that sports can help to provide, whether they are sports stars or not. Sports must help to bring out, to tap the star qualities, the heroism, the confidence, etc, that is in all of us. Sports in our high schools must help equip us for life after sports.

As mentioned by the Florida-based clinical psychologist, Dr Jason Scott Hamilton, each person should be feeling and believing before going into every competitive situation that "everything is surmountable and I can beat the odds no matter what, as long as I use the power of my mind".

This is one of the key concepts that sports in high school should be endeavouring to get our youngsters to understand and to transfer to other areas of their lives - the power of the mind and the power of attitude. If sports in our high schools would focus on goals like the above instead of the goal of winning-at-all-costs, then our schools would be well on their way to accomplishing their educational mission, and Jamaica would be better poised to produce more decent and productive citizens.