Blatter: FIFA gets guarantees from Brazil 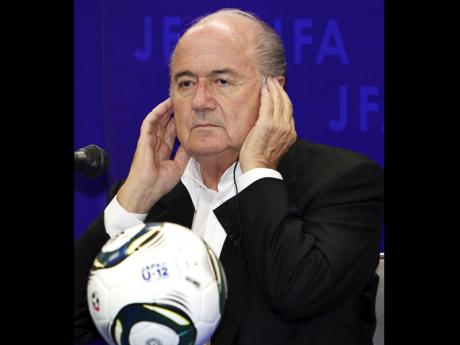 BRASILIA, Brazil (AP):Brazil reassured FIFA yesterday it would fulfil its commitments related to preparations for the 2014 World Cup.

FIFA President Sepp Blatter said he had a "good meeting" with Brazilian President Dilma Rousseff and they agreed to work more closely together to help keep the country's preparations on track.

He added he would deal with the problem involving the Brazilian government and FIFA Secretary General Jerome Valcke, who was in charge of working with the government. The meeting came two weeks after Valcke made harsh remarks about Brazil's slow preparations for the tournament.

Pele and Ronaldo also joined Blatter and Rousseff in the nation's capital. Brazil Sports Minister Aldo Rebelo, who threatened to cut the country's ties with Valcke, also attended. Pele is a World Cup ambassador, while Ronaldo is a member of the local organising committee.

"It was a good meeting because it gave me an opportunity, and (an opportunity) to the president, to exchange some points of views on this World Cup," Blatter said. "I'm happy with the outcome of this meeting. You will see a smiling FIFA president and we are looking forward to a very good organisation here."

The FIFA president said he was happy to hear from the government that it remains committed to fulfilling the guarantees promised to FIFA.

"The president has said that there is no doubt that the government of Brazil will implement all guarantees that have been given to FIFA by the government before she entered into office," he said. "The government will fulfil the requirements and guarantees given, and I trust Brazil."

FIFA had been expressing concerns over delays by Brazil's Congress to approve a World Cup bill regulating the tournament and giving FIFA the financial and legal guarantees needed to organise the event.

The sticking point in the bill is the sale of alcohol inside stadiums, which is against the law in Brazil but is demanded by FIFA because Budweiser is a major World Cup sponsor. Despite Rousseff's assurances to Blatter yesterday, it remains up to Brazil's Congress to approve it.

The bill was one of the issues that prompted Valcke to make his remarks two weeks ago. Blatter asked for the meeting with Rousseff while apologising for Valcke's comments, but he hinted that the issue was not a main topic in yesterday's meeting.

"We have not discussed any details with President Dilma. FIFA's secretary general is a theme for FIFA," Blatter said. "Jerome Valcke continues to work for FIFA. The problem between Jerome Valcke and Brazil is a problem for FIFA's president, which the president has to solve."