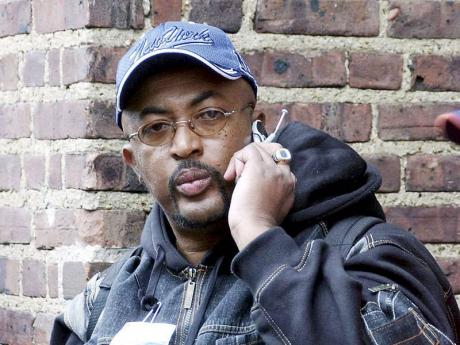 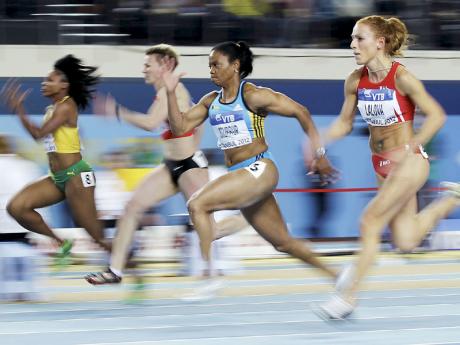 Jamaica's Aleen Bailey (left) competing in the third and last semi-final of the women's 60 metres at the March 9-11 IAAF World Indoor Championships in Istanbul, Turkey. Others in photograph (from right) are Bulgaria's Ivet Lalova, Chandra Sturrup of The Bahamas and Yulia Nestsiarenka of Belarus. Sturrup won in 7.21 seconds with Lalova second and Bailey third. Both Lalova and Bailey were credited with the same time, 7.23. - AP
1
2

The secret to Jamaica's success in sprinting is now a hot commodity, sought not only by track and field interests, but athletes at the highest levels in other sports, including the professional ranks in the United States.

Athletes who need speed, but don't specialise in track, are showing keen interest in training techniques used by Jamaicans who not only run fast, but have claimed the global summit of sprinting. Some have hired coaches specifically with Jamaican background, picking their brain for island-grown knowledge they hope will boost their burst.

"It gives you an edge knowing that Jamaican sprinters are the best in the world," said Owen McGregor, a former St Andrew Technical High School star and national representative who currently coaches in the US.

"It's in the news, people recognise the Jamaican sprint brand. Everybody recognises it."

Now they want to tap into it. McGregor, a former US college track coach, said he has been hired by professional athletes and teams from multiple sports, including what Jamaica and the world know as football, and what is called American football in the US. So far, McGregor said, he has worked with members of the US women's national football team, such as Abby Wambach, Hope Solo and Christy Rampone. He has also coached National (American) Football League (NFL) players, including Ronnie Brown. The running back played for clubs like the Miami Dolphins and Philadelphia Eagles. He hired McGregor after suffering a knee injury in 2007.

The achievements of world-class athletes such as Usain Bolt, Veronica Campbell-Brown, Asafa Powell and Yohan Blake have stirred interest in Jamaicans' knowledge of sprinting, especially in the way the athletes are prepared by coaches with Jamaican background.

"They know you come in with that experience," said McGregor, who has been coaching for more than two decades.

Others have noticed the trend. Jamaican Victor 'Poppy' Thomas, a track coach at Lincoln University in the US, said he had been approached by some of the school's American football players harbouring aspirations to play professionally after graduation. Thomas, who has recruited many athletes from Jamaican high schools who have contributed heavily to the success of Lincoln's programme, including Commonwealth Games and Pan American Games 100 metres gold medallist Lerone Clarke, believes they show up with a single goal.

"They want to get faster," said Thomas.

"Over the years, they have seen (Jamaica's) success on the track and they know a lot of our athletes are from Jamaica and the Caribbean. They think maybe I can help them get faster. Their whole emphasis is on speed."

Thomas said he has also witnessed coaches in other sports employing training methods specifically designed for sprinters - such as "high knees and the A, B and C skip" - which he has used since his time coaching in Jamaica.

"The first fundamentals that you use to teach a youth to sprint," he said.

McGregor, while an assistant track coach at Florida Atlantic University a couple years ago, was also asked to help athletes from FAU's other sports. A 2010 story in the Palm Beach Post newspaper noted that Lester Jean, a player on the school's American football team, "met (with McGregor) at least twice a week to work on Jean's explosiveness coming off the line, his timing and rhythm, the positioning of his body and hands while in his stance".

One FAU coach called Jean "a different person" after his sessions with McGregor. The player made the 2011 roster of the NFL's Houston Texans.

American interest in the past, especially college coaches, was largely focused on securing talent to compete.

"They wanted to know how they can get Jamaican athletes," said Raymond 'K.C.' Graham, who recently had a coaching stint at at a US college.

Seeking Jamaicans' expertise in sprinting, even for use in other sports, appears to be gaining appeal. Bolt, for example, reportedly gave Cristiano Ronaldo tips on improving his speed while the football star was at Manchester United.

Now the business of hiring Jamaican track coaches to help athletes in other sports get faster appears to be evolving into a lucrative cottage industry. One Jamaican in the US, who could not be contacted up to press time so has not been named in this story, has set up a centre to coach "a lot of pro athletes" to get faster, according to another coach.

What is also working for some coaches is that they were involved in multiple sports while living Jamaica, making them flexible to teach sprinting to athletes outside track.

"I know what a (football) player needs," said McGregor, who played at the schoolboy level in Jamaica during the 1980s. "Speed, agility, endurance. So that's why I was sought out ... I know how to coach speed."

As the word spreads about Jamaica's expertise in sprinting, and demand for coaches' services rise, they can expect a windfall of added rewards.

"If you can help them to get faster," said Thomas, "you have a nice food to eat."