Old Fort Craft Market - A standing testimonial to the past 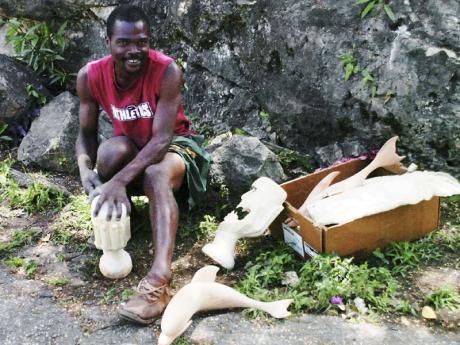 Woodcarver Anthony 'Munto' works on a new piece at the Old Fort Craft Market, where vendors say they have not had any visitors from the cruise ships since December.

Fort Montego in St James is the remains of a British fort and is among several that were built in the 1700s to defend the island.

While designed to repel invasions from pirates and the naval forces of the Spanish and the French, the cannons were never fired at the enemies.

"In 1760, one of the fort's rusty guns exploded and killed a gunner while firing a salute to celebrate the surrender of Havana," reads a section of a post on the Jamaica National Heritage Trust's website.

"The only occasion the fort fired at a ship was in 1795 when the officers at the fort mistook an English ship for a French privateer. Luckily, there were no casualties."

The cannons, which are now historical monuments in the city of Montego Bay, were also used during the British monarch's birthday, or on the visit of very important people.

The website also suggests that the facility was a large fort that housed four 12-pounder guns and five smaller guns at one point, but was considered inefficient. Today, only three cannons remain at the heritage site, which is home to the Old Fort Market.