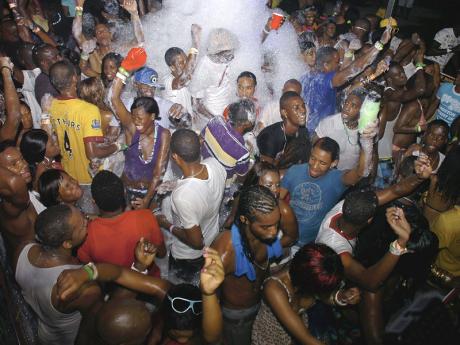 Patrons making the most of the pool pit at ATI Wildside in Negril last year.- FILE

WESTERN BUREAU:The resort of Negril in Westmoreland will host the rebranded West Affair, which has grown from a single-night event to a party series, organised by the Canadian-based promotions group, Papernote Entertainment.

Head of the events-promotion company, Gregory 'Ziggy' Senior, disclosed that approximately $3 million would be spent to stage the event that will run from April 6 to 9.

"We thought it was important to stage this event in Negril due to the easy access to party venues and accommodation," Senior said in a release. "West Affair will be an authentic entertainment experience that will not only benefit our patrons who attend, but other stakeholders in the Negril area."

"Generally, events tend to bring in business to the area and add to the entertainment value of Negril. They bring in additional guests, which not only benefits the hotels, but the restaurants and other linkage businesses," Wright explained.

"We have seen with the staging of other events the benefits they bring to the town, so we definitely welcome more entertainment events in Negril."

The West Affair party series will be made of up events such as Splash on April 6; Burn Reloaded on April 7; then Bikini Malibu on April 8; and on April 9, the series will close with Glamor.

Senior stressed that as a benefit to partygoers, deliberate steps were taken to stage only one event per day.

"After listening to our audience, we decided to change the format of the event that allows patrons the benefit of relaxing in the day and being refreshed for the party in the night."