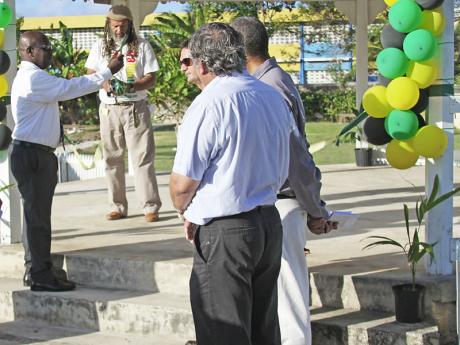 Mayor of Falmouth Councillor Collen Gager (left) cuts the ribbon at the handover ceremony for the refurbished Victoria Park by the Falmouth Heritage Renewal Company.- photo by Richard Morais

FALMOUTH, Trelawny:The Victoria Park in Falmouth is now boasting a $5-million rehabilitation job and has been returned to the Trelawny Parish Council by the Falmouth Heritage Renewal Company, which led the restoration efforts.

This historic park, which was built in 1854, is now gated and fenced with several features, including a play area, a paved footpath, royal palm trees, and flowers. The bandstand was also rebuilt and eight anchored benches erected. An irrigation system was also installed.

The facility was rebuilt and rendered with historic grade lime mortar to give an extraordinary look as well as to offer protection from the salt air.

A part-time attendant has been employed by the Trelawny Parish Council to help maintain Victoria Park.

Mayor of Falmouth Collen Gager praised the stakeholders who invested their vision and resources in the project during a recent handover ceremony. He also called on the citizens to take care of the facility.

"I ask that we treat it as a treasured piece," Gager stressed.

Ivor Conolley, director of external affairs for Falmouth Heritage Renewal, gave an overview of the project, which received funding from the Culture, Health, Arts, Sports and Education Fund, the Environmental Foundation of Jamaica, and other private donors.