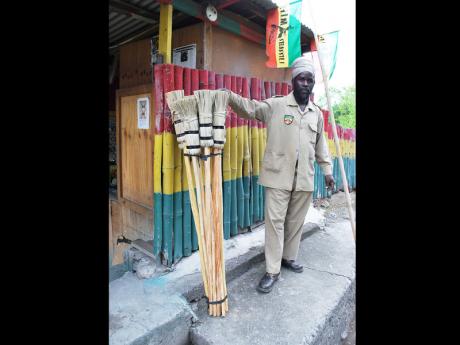 Gregory Taylor poses beside some of his creations at his shop in Papine, St Andrew.- photo Robert Lalah 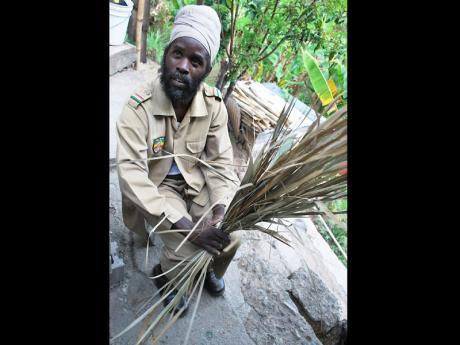 Making brooms is an art. It's also a science, according to longtime broom-builder Gregory Taylor. Anyone who frequents Papine in St Andrew knows about Taylor and his intensity, while creating brooms. He owns and operates a small shop near the square and he can often be seen dextrously manipulating straw and stick until there stands before him his finished creation.

"It's more than just a broom," said Taylor. "It's a work of art. There is symbolism in the broom, which is why it is a part of the Rastafarian culture," he said.

"The broom signifies cleanliness and purity."

"It is an art, like painting or pottery, that requires skill and training. It also require that you love it. If you don't love what you doing then you can't make a proper broom," said Taylor.

"A lot of young people come here and watch what I am doing and ask if I can teach them, but when they try it, they don't like it 'cause it takes a lot of time. They not into that. They don't have the spirit for it."

Taylor learned how to make brooms when he was a child, watching the elder Rastafarians at work.

"When I saw how they could take straw and stick that grow wild and turn it into something to help them to survive, I say I need to learn this thing. It is a very important thing," he said.

Taylor said he can make about 100 brooms in a week. "But I don't rush to do that. Each one have to get special attention. Every one is a creation and must live up to certain standards."

A regular house broom sells for about $150 while the extra-long broom, used mainly to remove cobwebs from ceilings, costs about $200.

"I just love what I do. I just need to make enough to take care of my family," said Taylor. "When I make a broom and it is made well, that makes me very proud."