Date-appropriate launch for 'The Longer Run' 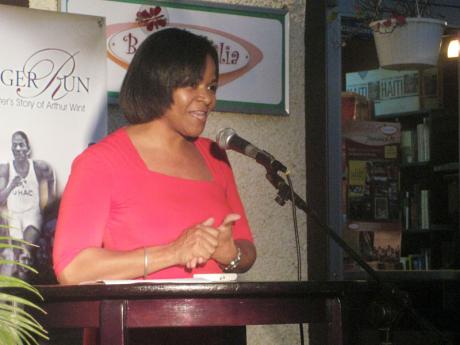 Christine Randle of Ian Randle Publishers speaks at the launch of 'The Longer Run: A Daughter's Story of Arthur Wint' at Bookophilia, Hope Road, St Andrew, on Thursday evening.-photos by Mel Cooke 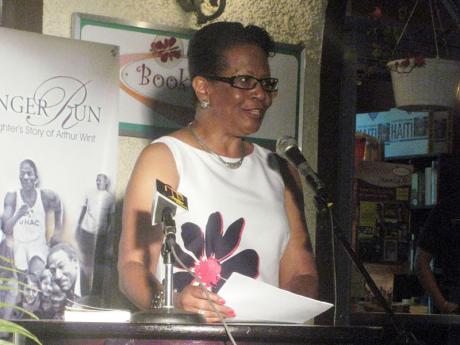 Dr Jean Beaumont shared family insights as she spoke at the launch. 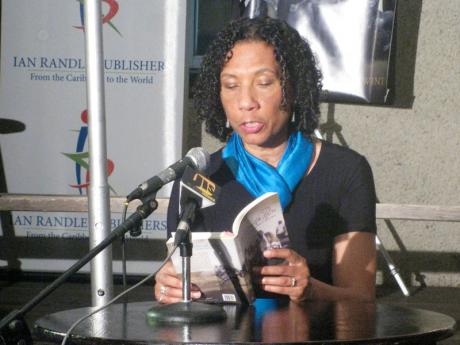 Christine Randle, managing director of Ian Randle Publishers readily pointed out last week Thursday evening that the launch of The Longer Run: A Daughter's Story of Arthur Wint, comes some time after the book has been available to the public. However, she said that it was appropriate, with the Olympics heading back to London for the first time since 1948, when Wint's exploits were among those which put Jamaica squarely on the world athletics map. Plus, it was also held during the Book Industry Association of Jamaica's (BIAJ) celebratory week, which culminated in the Kingston Book Fair at Emancipation Park, New Kingston, yesterday.

Written by Valerie Wint, The Longer Run is one of a trio of books on athletics which, Randle said, not only encapsulate the past, present and future of athletics in the Caribbean, but are also a coup for Ian Randle Publishers.

During Dr Jean Beaumont's address a drizzle forced relocation of the reader's table, this bringing those speaking closer to the audience under the tent at Bookophilia, Hope Road, St Andrew. Beaumont spoke extensively to the history behind The Longer Run, putting in family anecdotes, and related Arthur Wint's life to the formation and achievement of dreams. "He was ready for any challenge," Beaumont said of Arthur Wint, pointing to his "natural self-esteem and dignity". And in congratulating the daughter on the book about her father, Beaumont said that Valerie had woven in the historical and social context to make for much more than simply a narrative of Arthur Wint's life.

Before reading from her book, Wint noted the role that Rachel Manley had played in the book, The Longer Run was started about two or three years after Arthur Wint died in 1992, but lay fallow for some time until a meeting with Manley in Toronto, Canada. Wint attended the launch of Manley's Drumblair and, after telling her about the book she was writing, Manley offered to help.

"I read Drumblair and was intimidated. It was such beautiful writing," Wint said. "I realised it was her voice. I had to find my voice."

There was a chance meeting, again in Toronto, and Manley enquired about the progress of the book. It was the start of an intense series of exchanges between Manley and Wint.

She spoke about her father, saying, "You make your choices" and, before beginning to read, noted that Arthur Wint had made four career choices - athlete, pilot, doctor and, for a while, diplomat.