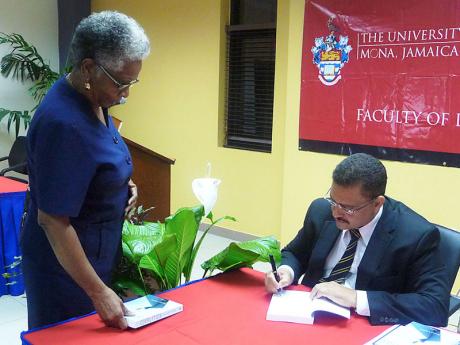 Peggy Sinclair (left) hangs on to the copy of the book 'Corruption' signed by author Derrick McKoy for her husband John, as he signs a second copy for family friend Thomas Ramsay, following the book's launch at the new Faculty of Law, University of the West Indies, Mona, last Wednesday.- Photo by Andrea Hoo Fung

New book explores one of the vexing issues of our time

At a time when corruption is rife and former governors, notably the United States' Rod Blagojevich, who just began his prison sentence, and Nigeria's James Ibori, who is still awaiting sentence, are being disgraced by their acts of corruption, Derrick McKoy, former contractor general of Jamaica and deputy leader of the University of the West Indies' Faculty of Law, has published a book, the first for the new faculty, aptly titled CORRUPTION.

These fairytale-iconical role models are not alone. They are joined by Brazilian Confederation of Soccer head Ricardo Teixeira; Yang Yimin, a former deputy chief of the Chinese Football Association; and even members of anti-corruption committees, among others. What is evident, then, is that corruption is rampant and transcends time and space, is untethered by geography, and presents challenges for those who seek to thwart it.

Speaking at the recent launch of McKoy's book at the newly constructed Faculty of Law on the University of the West Indies' Mona campus, Professor Trevor Monroe, master of ceremonies at the event, noted that there was "no other issue that has so preoccupied Jamaicans, Caribbean Commonwealth citizens, and indeed the global community over a sustained period of time than the matter of corruption".

difficult to deal with

Citing a United Nations study on citizens' security, Monroe pointed out that of the 11,000 surveyed, almost half felt the criminal justice system was having difficulty dealing with the issue, particularly in high society. And, shockingly, in Jamaica's two major newspapers, 43 letters to the editor, columns and editorials dealt with various aspects of the topic of corruption, Monroe said.

"Corruption is one of the vexing problems that face the commonwealth Caribbean," Professor Gordon Shirley, UWI Mona's principal, also present at the book launch, said, as he lauded McKoy's book for addressing the nature of the challenges and putting forward some suggestions for the way forward. Professor Monroe concluded that it was "extremely important and path-breaking work".

Delroy Chuck, who was also present, not in his capacity as member of parliament but as writer of the book's introduction, was impassioned when he said it was a book worth reading "to see the challenges ahead of us because crime, violence and corruption are perhaps the greatest problems we have in Jamaica. If we can remove these, Jamaica would take off economically".

"Corruption," he noted, "is a major problem not only in Jamaica, in developing countries, but in developed countries as well."

The book's author said that the ideas for the book, fully titled CORRUPTION, Law Governance and Ethics in the Commonwealth Caribbean, were first "sown" during his tenure as contractor general but were influenced by many people and events along the way. He underscored Chuck's comment when he presented an extensive list of corrupt activities ascribed to the United Kingdom (UK) and observed that while "few think of the UK as a corrupt country", that country and other developed countries are not immune to corruption. "Had the press attributed all or any of those complaints to an African, Asian, Caribbean or Latin American country, certainly if those allegations arose in the Commonwealth Caribbean, we would have … no difficulty at all raising the indictment of corruption," he said. "We live in this peculiarly distorted world. We are all happy to describe ourselves as corrupt and we refuse to see it in others, even when the most compelling evidence suggests otherwise."

McKoy opined: "Those of us engaged in the anti-corruption struggle have been guilty of creating and promoting this warped state of affairs … too many have been converted to the view that the end justifies the means. Thus, following on the initiative of Transparency International, we have emphasised the perception of corruption, rather than corruption itself … perhaps it is time to put an end to this warped state of affairs … we know where it leads. We know that corruption is debilitating to the distribution of all public goods … We know that improving capacity, capability and the application of best practices are essential to the public procurement processes, but the best trained and most able procurement officers will be insufficient to the challenges if they still operate in a corrupt environment." He said it was time to abandon overseas methodologies of corruption and "find ways to build effective anti-corruption regimes in underdeveloped and under-resourced countries".