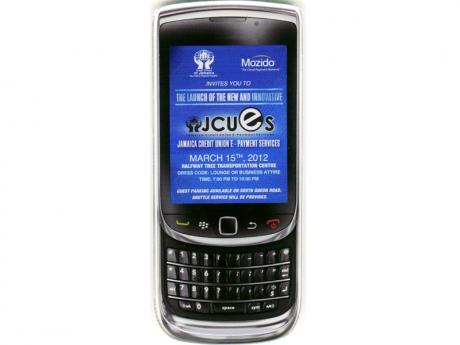 This invitation in the form of a cellphone was sent out by JCCUL for the 'launch' of its new epayment service. 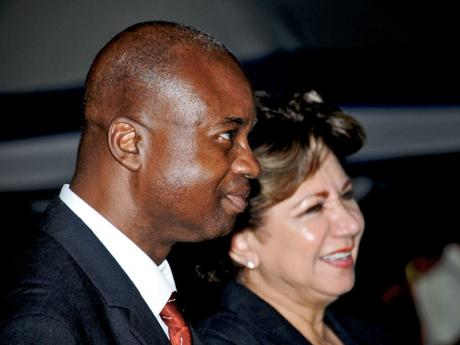 The Jamaica Cooperative Credit Union League (JCCUL) pressed ahead with the introduction of its new epayment services JCUES as planned on Thursday evening, but under a slightly revised banner.

Instead of a 'launch of the innovative and new' product that the initial invitation touted, the evening for which the heads of some 42 credit unions had cleared their calendars to attend was repositioned as 'stakeholder sensitisation' amid the central bank's warning that the group needed its approval to offer the service.

The digital payment system was created for the near one million members in 40 credit unions nationwide with an original activation date of March 23.

But, the Bank of Jamaica (BOJ) advised the JCCUL on Wednesday to delay the launch until it completes an assessment and approves the new service.

Held in the Transport Centre, Half-Way Tree in Kingston, the keynote speaker for the event - into which clearly the JCCUL had sunk a hefty investment with colour-coordinated décor, cocktails served and a live band in attendance - was Minister of Industry Investment and Commerce Anthony Hylton.

JCCUL general manager Glenworth Francis said at the launch that application for JCUES would be delayed until "the BOJ completes its investigation and is satisfied that there are no risks involved".

Francis said earlier that the league understood the BOJ's position and had advised the central bank of its cooperation.

"We ... understand the position taken by the BOJ as the regulator of the payments and clearing systems that there is need to ensure that any possibility of underlying risks are appropriately addressed before the new epayment service goes to market," said Francis.

"We, too, share and support that position of the BOJ and we, respectfully, wish and intend to comply with any requirement in respect thereof. In addition, and consistent with the BOJ's directive 'not to proceed with offering the product to the public', the JCCUL has given an undertaking to the central bank that the league will not offer the product to our members, prior to being advised of the BoJ's conclusion of its assessment of this service."

Kavin Hewitt, CEO of Mozido Jamaica, the company responsible for designing the new system, 'talked-up' the benefits of such services.

"Mozido is providing a multichannel electronic proprietary platform which enables JCCUL to provide epayment services to their customers and that meet their compliance needs," Hewitt told Sunday Business ahead of the event.

"We are confident that JCCUL and the BOJ are working together to better serve the Jamaican community and appreciate the opportunity to introduce the electronic payment technology into the Jamaican market with JCCUL."

Said Claudette Christie of JCCUL: "The event at 7 o'clock this evening is not a public launch, but an introduction of the epayment system to stakeholders, including credit unions and partners. We would appreciate if you could make that distinction."