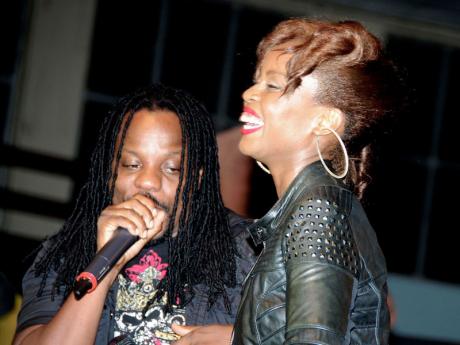 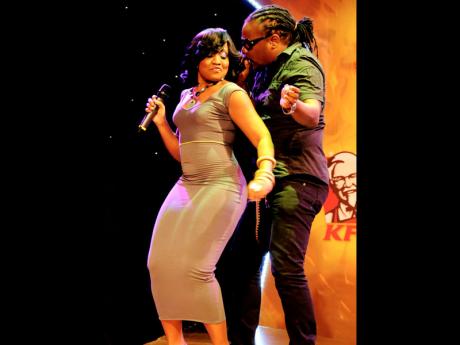 Latty J turned up the heat with a sexy performance with Chuck Fenda during last year's Digicel Rising Stars.
1
2

DON'T go around calling Chuck Fenda a dancehall artiste, though he might have started his career as the typical fast-talking, street-swag deejay.

He's among a number of local artistes who, either through maturity or spirituality, have traded 'badman' and 'girls' lyrics for what he has described as cultural music.

Whether reggae music purists are ready to embrace the likes of Chuck Fenda, Capleton and others as cultural acts, he has 'repented' in more ways than one - by song and actions.

"I started as a dancehall artiste singing certain songs, Shut Yu Mouth When Badman Talking, that was when I left school. It became a dancehall anthem.

"When I look at that, I regret doing a song like that, knowing it led a lot of youth astray. I've told nuff soundman fi bruck up dem song deh. From I did I swear, I never went back and did another gun song," Fenda said, pointing to the song with its catchy and to-the-point chorus.

I swear, that I will never switch

I swear, I keep on giving u songs like this

I swear, that I will never hitch

to defend poor people, one a mi greatest wish

Since changing his act, Chuck Fenda has become more mainstream, scoring big with a timeless duet with Cherine Anderson, Are You Coming Over Tonight, a love song he was requested to perform alongside last season's Digicel Rising Star runner-up Latty J.

"It felt great to know Chuck Fenda is her favourite artiste," he said. "It's the good music you do. I felt great, it's a wonderful song, a big song, it's like a collectors' song.

"When the young contestant called, I felt great and I went to give my support, encourage the young artiste, help them and enhance them. It was a good feeling to share the stage with her. She respects me as an artiste," he added.

It is this respect that drives Fenda to stay the course, reaping international rewards along the way.

Pleased with the success of Are You Coming Over Tonight, Fenda and the songbird Anderson followed up with Call On Me, another love ballad.

"At the stage I am right now, I am not a dancehall artiste, I am an entertainer, a conscious reggae entertainer," said Fenda. "My main thing is message music, you can learn from it, substance music.

"I deal with current things, songs like I Swear, Can't Stop Try Wi Affi Win, a song like Gash Dem An Light Dem, talking about senseless rape, child killings and negativity, songs that can do something for the younger generation ... songs to help them choose the right road, as there are two roads in front you. We don't watch the hype, who is running the place, we look 10 years down the road, not living for just tomorrow alone."

Reggae music, Fenda said, always rises to the top, internationally, regardless of what's hot on the streets of Jamaica.

"In Jamaica, a hot rhythm comes up and is gone within six months. Look at I Swear, done in 2002 or 2004, when I go on a stage and say 'I Swear', the whole place lift. That standard set and live on.

"When I go to Europe and 75,000 people are at a festival, these people are buying music and listening to good, quality music. The illusion road is not my road," he added.

Fenda named himself, Richie Spice and others whose music is global, far outstripping the streets of Jamaica or club dates in North America.

"I do all the major shows in Jamaica - Sting, Rebel Salute and Sumfest. From me and Richie Spice rise, we always doing it. In Jamaica, you can only do so much. We have to take our thing to global and international levels, selling out stadiums and arenas.

"That's where our music is - Europe, Kenya, Japan and China. In Jamaica, you do so much and keep repeating yourself, next year it's same thing again.

"I am looking at the bigger view. It's Jamaica and that's where the music is, but I look to cultural music where the world wants it. We're getting more fans in other countries. You can tour France for six months and still not finish it. That's just one country in Europe," he pointed out.

Fenda believes the 'badness' market is congested and will eventually die.

"We focus on all markets because not everybody can be a 'badman' artiste. We are spiritual artistes. I am not a gangster artiste.

"God rule the earth and nothing lasts forever. The sea will always take its course. Evil can't conquer good. You might see two little man rail up an a sing two songs, but dem nah last. The biggest artistes in the world are cultural artistes."

He pointed to one of his songs, which he said was ripping Europe, saying he has never heard it being played in Jamaica.

"My biggest song in Europe right now is Gwaan Plant," he said, breaking into song, "Gwaan Plant, a more marijuana mi want, informer gwaan chant ...', It has never been played in Jamaica, yet we still fly out every weekend and please the fans."

He said he "idolised Bounty Killer as a little youth", but found his true self with Fifth Element Records "and they opened up things for me, Richie Spice and Anthony Cruz".

"Richie brought in Spanner Banner and we resurrected cultural music in the dancehall. Then you had Fanton Mojah, IWayne, Bascom X, a whole heap a dem start rise up when we resurrected the thing," he said.

That resurrection, he pointed out, is also prevalent in the minds of youths he has come across.

Chuck Fenda isn't a Jamaican by birth, he was actually born in the United States.

"I came into earth different," he said. "When my mother got pregnant, she didn't even know she was pregnant. She had me over there and send me back to Jamaica at six weeks old, sent me back with a lady to my grandmother, so I went to Spanish Town Infant, Primary and Jonathan Grant.

"I went back to foreign to work at about 17, because in Spanish Town they didn't want me to get into politics. I came back to Jamaica to do music, at about 27," said the 39-year-old artiste who also enjoys a day at the races with friends.