The case against striking Iran 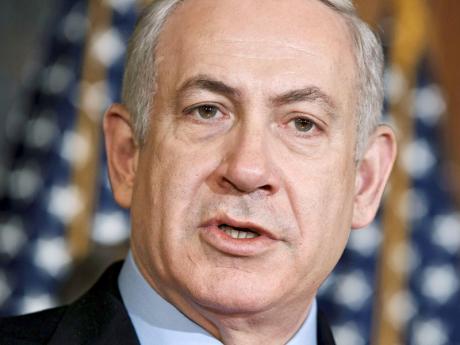 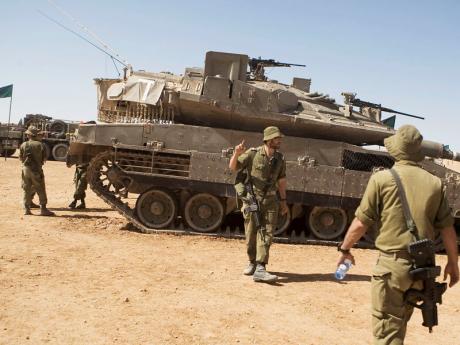 In this October 12, 2010 file photo, Israeli soldiers walk next to the tank Merkava 'Mark 4' as they take part in a large military exercise at the Shizafon Armored Corps Training Base in the Arava desert, southern Israel. For more than a decade, Israel has systematically built up its military specifically for a possible strike on Iranian nuclear facilities. - AP Photos 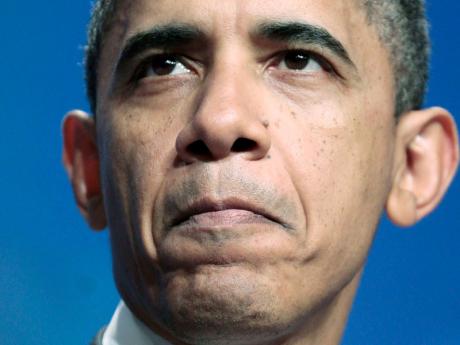 Many fear that another major
global crisis could erupt soon if Israel strikes Iran over its alleged
plan to develop nuclear weapons, sending oil prices to the sky and
provoking an escalating political crisis in the Middle East, and
possibly globally, as Americans are targeted for terrorist attacks.

There
are many who fear these dire consequences of an Israeli attack on Iran,
but who are so deeply aroused over Iran that they believe the world
should be willing to face those consequences because, in their view, a
nuclear-armed Iran presents far more terrifying prospects. There are
many sincere people who, knowing the hostility of Iran toward Israel and
Israel's pariah status in the Middle East, feel that Israel has a right
- indeed, a responsibility - to pre-emptively strike Iran because what
it faces is an existential threat. Ahmadinejad is a Holocaust-denier who
has openly questioned Israel's right to exist. Many backers of Israel
say Iran wants to drive Israel into the sea and that Israel must never
allow that country to develop nuclear weapons.

So the drum roll
for war is being sounded, and in an election year in the United States,
with Republican presidential contenders with such an abysmal ignorance
of foreign-policy issues, rationality is likely to be the first
casualty.

What would a strike against Iran's nuclear facilities
accomplish, and would it deter Iran from ever again attempting to
develop nuclear weapons? First, one cannot objectively say that
President Obama has been soft on Iran. No president has been tougher on
Iran than this Democratic president. In fact, in this week's Newsweek magazine (March 19), there is a stinging attack on Obama from the distinguished Rhodes Scholar, Yale-educated former New Republic
magazine editor Peter Beinart. In a major piece, 'How Obama Caved in to
Israel', the liberal intellectual charged Obama with capitulating to
Israeli Prime Minister Netanyahu.

"In his effort to win
Netanyahu's favour, Obama committed himself - for more explicitly than
ever before - to taking military action if there was no other way to
prevent an Iranian nuclear bomb. It was a far cry from the early days of
his presidency when he told the Iranian people that 'this process will
not be advanced by threats.' Now his oft-repeated words are, 'No options
are off the table'."

No one can
credibly claim that Obama is not a firm, unflinching supporter of
Israel, and someone who, as he himself said, has "Israel's back". So if
the Obama administration is saying to Israel, hold off any plans to
attack Iran now, that must be taken seriously. Obama is no mindless,
appeasing dove. He has even openly rejected containment as a strategy
for dealing with Iran, overturning decades of US foreign policy on that
nation.

He has significantly deepened sanctions on Iran and has
even got the European Union to agree to a ban on oil imports. The
Obama-coordinated international economic pressure on Iran is causing
serious damage to the Iranian economy and is forcing the regime there to
think seriously about its moves. When the executive director of the
powerful America Israel Public Affairs Committee (AIPAC) declared at its
recent meeting in Washington: "President Obama and his administration
are to be commended. They have - more than any other administration,
more than any other country - brought unprecedented pressure to bear on
Tehran through the use of biting sanctions," you have to sit up.

And no one who reads Obama's interview with Joshua Goldberg of Atlantic
magazine on Iran (March 2) can be in any doubt that Obama is not
bluffing with Iran and is intent that America will not allow Iran to
develop nuclear weapons. Obama's position is that he is not just taking
that position in Israel's interests, but in US national security
interest and in the interest of the international community, as he
insists a nuclear-equipped Iran would threaten not just Israel but the
entire international community. This is how he is getting unprecedented
support from Western Europe, Russia and China in stepping up the
pressure on Tehran.

The history of the Iraqi invasion and all the
mess that that has involved is ample demonstration of the wisdom of not
rushing into military action. Every reasonable action must be pursued to
avoid that. Yes, your adversary must see you as tough and resolute, but engaging in a muscular foreign policy is foolhardy when there are other options. The case against not striking Iran now is substantial. I recommend two essays by scholars who marshall the best arguments for and against a strike.

See Matthew Kroenig's 'Time to Attack Iran: Why a Strike is the Least Bad Option' in the January/February issue of Foreign Affairs journal. (He is the author of the book, Exporting the Bomb: Technology Transfer and the Spread of Nuclear Weapons); and see a cogent reply to that essay by Georgetown University's Colin Kahl, 'No Time to Attack Iran', in the latest issue of Foreign Affairs (March/April). But if there were ever any doubt about the wrong-headedness of a pre-emptive Israeli or American strike, it would be hard to sustain that doubt after reading Marc Lynch's policy paper published by the Centre for New American Security: 'Upheaval: Policy Toward Iran in a Changing Middle East' (June 2011). This scholarly paper locks in the case against a military strike, showing it could only delay weaponisation.

Another excellent piece which shows the foolhardiness of the hawks' position on this issue, and which even counters some of President Obama's own fears, is that brilliant Harvard-educated journalist Fareed Zakaria's essay, 'Another War in the Middle East', in the latest issue of Time magazine (March 19). But while Zakaria cites South Korea and Japan as examples of countries which did not pursue nuclear weapons after North Korea obtained its; and while Saudi Arabia and Egypt also did not follow suit with their adversary, Israel, developed nuclear weapons, hawks could counter that these countries were under the United States nuclear umbrella and were effectively client states and that, besides, they were rational actors. The Islamic regime in Tehran is not a rational regime and it is not deferrable. (The same position was held with regard to Saddam).

But the facts don't bear that out. The Iranian leaders have proven that while they are passionate Islamists, they make rational, strategic calculations. An understanding of Iranian political history demonstrates that. And Iran has not gone to war in more than 18 years. Even the chairman of the Joint Chiefs of Staff, Martin Dempsey, has said that Iran is a "rational actor". And by the way, the US intelligence community itself has twice concluded that there is no evidence that Iran has made a decision to build a nuclear weapon, and London's International Institute for Strategic Studies has agreed with that position. You might say the Iranian leaders are deceptive and pathological liars, and you could be right. But that still does not furnish you with evidence that their intention is not just to develop nuclear energy for peaceful purposes, as they claim. This is no 'Chamberlain-type appeasement' approach. There must be a balance between that and foreign-policy recklessness and adventurism, which George Bush engaged in.

People talk about Israel's "glorious" attack at Iraqi and Syrian nuclear targets in 1981 and 2007. But those provide absolutely no parallel to the Iranian situation. The attack on the Osirak reactor near Baghdad actually spurred a covert nuclear-weapons programme, as recent captured Iraqi documents demonstrate. After that attack, Saddam was even more determined to get nuclear weapons. A strike against Iran would only delay the process. And keep in mind that the desire to develop nuclear technology is not limited to this present Ahmadinejad regime. It is shared by many elements in the political elite. So regime change would not eliminate the desire to develop nuclear energy. There is also some evidence of popular support for the Iranian nuclear programme.

The Iranians are passionately nationalistic and are offended at the notion that any external force should decide what they should develop - especially two main antagonists who themselves possess nuclear weapons! To them, it is such galling hypocrisy and implicit presumption of moral superiority which inflame their nationalistic sentiments.

The Economist magazine, no left-wing rag, has a compelling editorial and special report in its February 25 issue ('Why an Attack on Iran Will not Eradicate the Nuclear Threat'). While admitting that an "Iran armed with the bomb would pose a deep threat," the Economist says, "Military action is not the solution to a nuclear Iran. It could retaliate, including with rocket attacks on Israel from its client groups in Lebanon and Gaza. Terror cells around the world might strike Jewish and American targets."

Logistically, Iran's sites are spread out, not easily identifiable, and some of them would demand repeated hits. "Any war with Iran would be a messy and extraordinarily violent affair, with significant casualties and consequences."

Says Professor Colin Kahl in his Foreign Affairs essay: "A US attack would also likely rally domestic Iranian support around nuclear hard-liners, increasing the odds that Iran would emerge from a strike even more committed to building the bomb."

The Center for New American Security policy paper says: "The military option should be rejected, barring some dramatic new Iranian move toward rapid weaponisation. The benefits are limited, the costs potentially high, the risks of escalation significant, and the impact on America's broader portfolio of global interests severe." That can't be brushed aside. "Crucially, a military strike will not provide a certain end to the nuclear programme either. Any strategy will leave a degree of uncertainty and risk. To do more would require an invasion and regime change, and even war hawks insist this is not on the table because of the costs and risks. The military does not have the deployable forces, nor does the American public have the appetite for an occupation of Iran."

The complications, uncertainties and risks of striking Iran are just too many for any justification - certainly not at this stage, if ever. Learn from Iraq. Give the sanctions and concerted action from the international community a chance to work. Give peace a chance.

Ian Boyne, a veteran journalist, is the winner of the 2010-2011 Morris Cargill Award for Opinion Journalism. Email feedback to columns@gleanerjm.com and ianboyne1@yahoo.com.