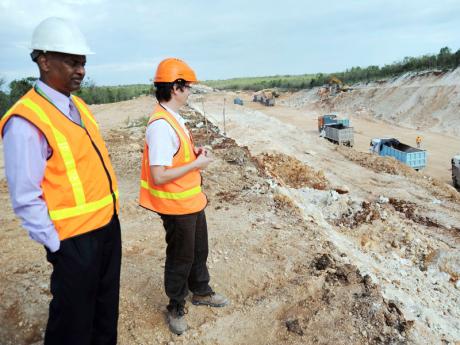 Ivan Anderson (left), head of the National Road Operation and Construction Company, and Marc Bocqueraz, manager for the production contractor, Bouygues, during a tour of the south coast highway in Clarendon. 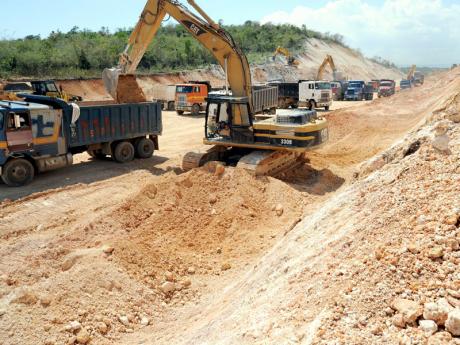 The next leg of Highway 2000 should be opened by September, but it will not be the much-talked-about and long-promised section to bypass Mount Rosser in St Ann.

It will instead be the 10-kilometre stretch of roadway from Sandy Bay to May Pen in Clarendon.

The Mount Rosser leg of Highway 2000 from Linstead to Moneague was slated to be the next section of the roadway to be opened, but that has been stalled by numerous issues.

These include geotechnical problems which forced a realignment of the road and pushed up costs to more than US$119 million, while a controversy about which entity should be contracted to complete the work had added a further delay.

But there is no such problem with the Sandy Bay to May Pen leg, and both the contractor and the state agency in charge of the projects last week told The Sunday Gleaner that by September Jamaicans should be able to cut the drive time between Sandy Bay and May Pen by about two-thirds.

Right now, driving at normal speed, it takes up to 30 minutes from Sandy Bay to May Pen. With the new highway, it should take about 10 minutes.

"I will do everything to make (the September deadline) and I think we will," Marc Bocqueraz, production manager for the contractor, Bouygues, said.

He was supported by Ivan Anderson, head of the National Road Operating and Constructing Company (NROCC).

"I am very confident. I think that Bouygues has shown themselves to be a very reliable and reputable firm, and once they give you a deadline it would take an act of God or major catastrophe for them not to make it, " said Anderson.

With NROCC confident that Bouygues will be done by September, work has now started to collect the data for the next stage of the work from May Pen to Williamsfield in Manchester.

Bouygues is spending approximately US$105 million to construct the May Pen to Sandy Bay stage of the highway, and Bocqueraz said most of the hard work is already done.

"We are about 50 per cent done on the overall work and we have started the asphalt work," added Bocqueraz as he took a Gleaner team on a tour of the partially finished roadway.

Bocqueraz said what is left to be done includes more surfacing work, metallic barriers, signs and markings, landscaping and completion of the tollbooth which will be located just outside of Mineral Heights.

While to the untrained eye sections of the highway seem many months away from completion, in other areas the multilayer asphalt is a joy to drive on.

Bocqueraz was adamant that the French company Bouygues is building a road that can be compared with the quality of roads anywhere else in the world.

"We are going to maintain this road for years to come and any problems would just add to our cost," argued Bocqueraz as he pointed out that the work was being done using British and American standards.

"I think we are building a road as we would be doing it in our own country, France, or the UK (United Kingdom).

Bocqueraz was clear that it is Jamaicans who are helping the company to achieve the standards as less than five per cent of the persons employed to build the road are expatriates.

He told The Gleaner that despite the majority of employees being Jamaicans, Bouygues has faced no more problems than it would face anywhere else in the world.

Not even extortion, which has plagued so many other construction sites across the island, is bothering Bouygues.

"The extortion is not more than I have met elsewhere or that I met in the UK. I mean you have the issue of persons turning up on the site, but it is not any different than elsewhere."

Bouygues has the option of building the next leg of the highway from May Pen to Williamsfield, but with the international financial market still tight, it's not clear yet if the French company will be able to source the millions of dollars which will be needed to give Jamaicans the chance to flow on the toll roads from Kingston to Manchester.