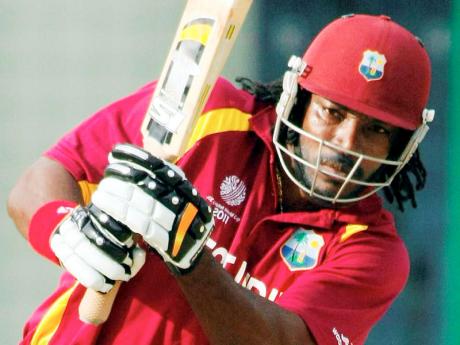 A chant of "we want Gayle" rang out from the stands as West Indies slid to yet another defeat, this time a 64-run loss after they were set a moderate 205 for victory.

Gayle, a former West Indies captain, has not played for West Indies in almost a year since making controversial comments that were critical of the West Indies Cricket Board (WICB) and coach Ottis Gibson.

He has been mandated by the WICB to withdraw the comments before he can be considered for selection again, but the Jamaican has refused.

At the post-match media conference, Windies captain Darren Sammy said the Gayle issue was being dealt with at a higher level.

"Gayle's matter is definitely not in my hands. We all know what the issue is and it's at board level," Sammy said.

"From since I've made my debut, since I've turned out to play I've always been glad to play with any West Indian cricketer, once you're going there and have been selected to represent the region."

Sammy, who replaced Gayle as captain of the regional side, said the fans were free to express their opinions.

"That matter is out of my hands and the crowd - it's a free country and everybody is welcome to voice their opinions," he remarked.

Gayle has continued to play in the various Twenty20 leagues around the world with much success and has also turned out in the WICB competitions, leading Jamaica to victory in the Regional Super50 series last October and blasting a shot-filled century for Jamaica in the Regional Four-Day championship last month.

The impasse has engaged the attention of regional Heads of Government, who discussed the issue at a meeting in Suriname earlier this month.