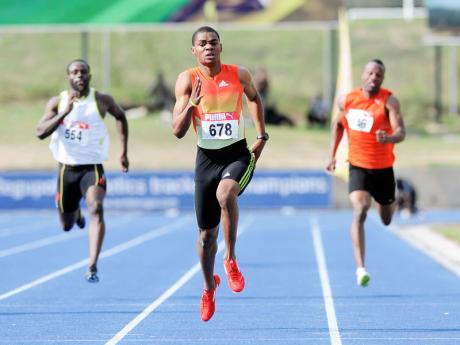 Warren Weir (right) of Racers Club sprints away from his opponent to win his 200 metres heat in 20.65 seconds at the University of the West Indies (UWI) Invitational track and field meeting at the Usain Bolt Stadium yesterday.- Ricardo Makyn/Staff Photographer

RACERS Track Club's Warren Weir ran impressively to win the men's Olympic Development 200 metres in 20.65 seconds, the fastest time among all male athletes in the event at yesterday's University of the West Indies (UWI) Invitational track and field meeting at the Usain Bolt Stadium.

Weir, who has shown tremendous improvement in the half-lap event over the past year, was very pleased with his first 200 run of the season.

"I am very pleased with my performance and also happy with the time in my first 200 metres of the season. This is much better than last year because I was injured."

In the women's equivalent another vastly improved athlete, Racers' Schillone Calvert, got the better of Kaliese Spencer in a close finish. Calvert stopped the clock at 23.56 seconds to Spencer's 23.62.

pull out all the stops

Racers athletes were dominant at the meet as Ristananna Tracey and Shavon Barnes won the women's and men's 400 hurdles Open events. Tracey, competing for the first time this season in the event, had to pull out all the stops as she won in 57.40 seconds to get the better of MVP's Stephanie McPherson, who clocked 57.46.

There were two exciting races in the women's and men's 400 metres. In the women's event, MVP's Sherone Simpson went out well, but former national champion, Rosemarie Whyte of Racers, took the lead at the 150 metres mark then pulled away for a convincing win in 51.86 seconds. Simpson (52.77) was second and Christine Day also of MVP was third in 53.34.

World Championships 100m hurdles champion, Brigette Foster-Hylton, gave an encouraging performance in her first outing this season. Competing in heat two of the women's 400m, she finished a close second in 53.87 seconds, just behind Sheryl Morgan, who won in 53.79 seconds.

It was 1-2-3 for Racers in the men's event. World Championships finalist, Jermaine Gonzales, ran a well-controlled race and finished strongly to win in 45.92 seconds, getting the better of Allodin Fotthergill (46.22) and Edino Steele (46.25) seconds.

In the 400 men's hurdles Barnes ran on strongly over the final barrier to win in 51.58 seconds ahead of his training partner, Bryan Steel, who led for the majority of the race. Steele was second in 51.77.

World Youth 200 metres bronze medallist, Shericka Jackson of Vere Technical, showed she will be a big threat in the Class One 400m, winning the event in 53.34. St Hugh's High Fellan Ferguson (56.82) finished way back in second place.