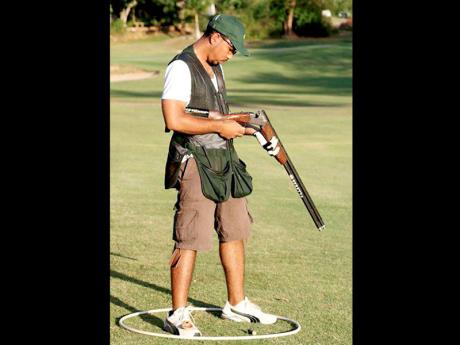 Barnes prepares his rifle to shoot during a previous tournament.- Contributed

The duo, who according to the organisers have been undergoing intense training in preparation for the event, are expected to face stiff competition from former national champion Geoffrey Ziadie, who makes his return after a break from the sport.

"The tournament should be a classic and one in which all those who turn out should enjoy," said Khaleel Azan, a member of the tournament's organising committee.

"A record number of 160 shooters have been confirmed, something that has never ever been seen before in Jamaica.

"We also have a waiting list of persons who we presently cannot accommodate, which is a demonstration that the sport is vibrant and that the effort and money that NCB Capital Markets is putting into the event is paying off."

The tournament, which will also have a charity component attached, is also expected to see strong competition in the juniors category.

Leading the way will be 14-year-olds Nicholas Chen and Chad Ziadie, while also expected to be among the mix in the 14 and over category will be Edward Lee.

The sub-juniors category, which features shooters 13 and under, is expected to have Brandon Reid and Andrew Azan battling for honours.

In the female category, many-time national champion Patsy Kelly is down as the favourite with the emerging Toni Barnes, who won last year's junior national, slated to be her main competitor.

Stephanie Gregg, who finished second to Barnes in the national juniors last year, is also expected to be among the main title contenders.

"The female section, which will have 11 contestants, should be one of the most exciting in years with several of the competitors having a realistic chance of winning the title," said Azan.

The tournament will be held using the run-and-shoot scoring method that is used during the World Championships.