Waterhouse aim to cut down Portmore 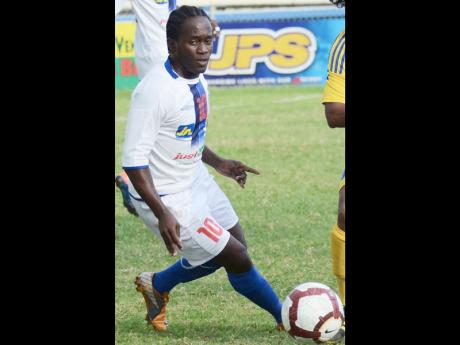 Portmore United's march to the Red Stripe Premier League (RSPL) title could come under serious threat from two angles as another five games are on today in the 12-team competition.

After enjoying a seemingly impregnable 11-point lead up to Monday of last week, the most consistent team suffered their first home loss of the season when they were rocked 4-2 by second-placed Boys' Town. With their lead now at eight to Boys' Town and 12 to Waterhouse with nine games remaining, Portmore United will have the two fellow title aspirants hot on their tail.

Of the two chasing teams, Boys' Town will have the better opportunity of recording a win as they host the relegation zone-rooted Village United and should be full of confidence after that morale-boosting win over Portmore United.

Village United, unless they pull off a miracle of even greater magnitude than they have managed for the last three or four years, will most certainly go down and could be pretty close to resigning themselves to that fate.

Waterhouse's task will be a little bit more difficult as they host Portmore United, the team they are trying to topple from the top of the pile. The gap looks daunting, but coach Donovan Duckie, who said last week ahead of their game against Harbour View - which ended in a 1-1 draw - that if they did not win then their hopes of winning the title would be dim, is relying on history.

That history is a direct reference to the 2004-2005 season when they closed a deficit of 13 points to overhaul Harbour View. Then there were 11 games to play instead of nine.

"That is where the motivation lies; Waterhouse was the same team that overturned a 13-point lead against Harbour View in the past, so that speaks volumes for our motivation to do that against Portmore," Duckie said.

"It is important for us to think about the history in terms of Waterhouse chasing Harbour View in the past and overturning a 13-point deficit."

Duckie added: "This game in itself against Portmore United on Sunday (today) is going to be very important for us in terms of our title chase. What we have to do is ensure that we win that game."

What may be important for Duckie to note is the more recent and direct history between the two teams. In the two matches so far between the teams this season, Portmore United have come out on top with 2-1 and 1-0 victories, respectively.

What could also go against Waterhouse is the fact that that their midfield enforcer, Hugh Howell, foolishly earned himself a red card on Sunday last, which makes him unavailable today and that their midfield brain, Vincent Earle, has still not recovered from a knee injury picked up in a game against Tivoli Gardens.

With those two out, the likes of Damion 'Cappo' Williams, the talented Weston Forrest, the competition's leading scorer Jermaine Anderson and Peter Keyes will have to take charge.

For coach Calvin Lewis and Portmore United, the main focus today will be avoiding a second successive slip-up in the short term and a Harbour View-like collapse in the long term.

"The thing that matters most is picking up points on the road and getting back to winning ways at home," Lewis said.

"Going there (Waterhouse), we are going to give it our best shot, but if we come away with a point we will be very grateful."

Like Duckie, Lewis is also being informed by history.

"Right now, the players are very much mindful of the '06 season and they don't want a repeat, so come Sunday (today) we will be going all out," Lewis said.

"We beat Waterhouse twice, but it is a new game and the settings right now are far different; people are vying for championships points, so what we have to do is just go there and avoid a defeat," he explained.

Portmore United's chances of winning should be strengthened by the return of Alanzo Adlam and the steadying influence of Damion Williams in midfield to guide his younger teammates.