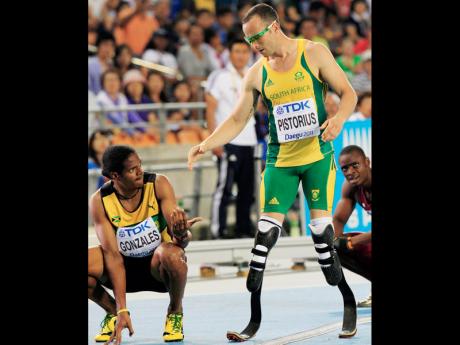 JOHANNESBURG (AP):Double amputee Oscar Pistorius ran inside the 400-metre qualifying mark for the London Olympics for a second time yesterday, leaving him one race from making history at this year's Games.

Pistorius was timed in 45.20 seconds on his carbon fibre blades at a meet in South Africa to win his first 400 race of the season. He again beat the mark set by track and field's ruling organisation for able-bodied athletes.

"I am absolutely thrilled to have run the Olympic qualification time today," Pistorius said after his run at the regional meet in Pretoria. "This is a huge moment for me and I am trying to take it all in. I felt strong out there and when I crossed the line and saw the time it was such a magical moment for me."

The 25-year-old multiple Para-lympic champion now must top the time once more in an international race to qualify for the Olympics, according to criteria now agreed on by Athletics South Africa and the country's Olympic committee.

Pistorius ran 45.07 in a race in Italy last year, faster than the then qualifying time of 45.25. The world track organisation has since adjusted the time for the 400 to 45.30.

Either way, the South African has twice gone inside the able-bodied qualifying standard and needs one more sub-45.30 run overseas to realise his dream of becoming the first amputee athlete to compete at the Olympics.

He was the first amputee athlete to run at the World Championships in Daegu, South Korea, last year.

Pistorius' agent, Peet van Zyl, said they were confident of making the time once more in a meet outside South Africa and sealing a place at the London Games.

"If you want to go to the Olympics, you have to be in form anyway," Van Zyl said. "We know he can do it."