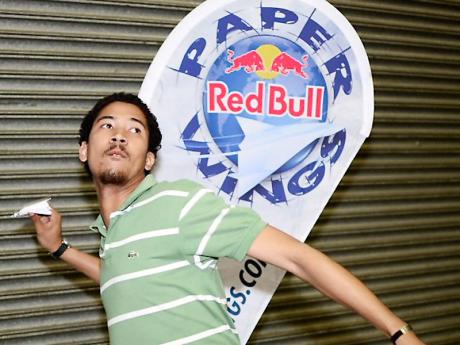 Kristoff Khouri prepares to make the first of his two winning throws during the Longest Distance category of the Red Bull Paper Wings local finals held last Tuesday at the University of Technology.- Contributed

KINGSTON:Home court advantage seemed to have served Kristoff Khouri well, as he 'flew' his way into the regional finals of the Red Bull Paper Wings (RBPW) finals at the University of Technology (UTech).

The competition stimulates aeronautical creativity in tertiary-level students across the world as they compete to see who is the best in flying paper planes the longest distance, for the longest airtime and with great panache - 'aerobatics'.

The dimensions of the competition have nearly doubled in just a short time, from 48 countries in 2006 to now more than 85, with 500 qualifiers.

Students from the Edna Manley College of the Visual and Performing Arts, Mico College University, UTech and University of the West Indies (UWI), who had previously qualified from the preliminary rounds held at the institutions between February 28 and March 1, matched skills at UTech in each discipline for a chance to nab a pass to the regional finals.

Khouri quickly asserted himself as a serious contender in the Longest Distance category, racking up an impressive 107 feet from his allotted two throws and maintained his top performance by recording 7.5 seconds in the Longest Airtime.

"I was last year's Longest Distance winner so I knew what to expect and was better prepared for the competition today," the 23-year-old Khouri remarked.

"Red Bull Paper Wings is an inspiring competition for college students and provides a great opportunity for exposure, plus it just helps to relieve the stress of studies," the finance and banking major added.

While he dominated these two categories, however, Khouri couldn't beat the UWI's Orlando Johnson's dazzling in-flight creativity that led to his winning the Aerobatics category with a perfect score of 15 from the three judges.

The first-year economics major was delighted with his victory, stating: "I came here to do my best and I'm happy with the results. I am really looking forward to representing Jamaica at the regional finals and hopefully moving on to the world finals in Austria."

Both winners now move on to the regional finals, where they have a chance to represent the Latin America and Caribbean region at the global challenge to be held in May in Salzburg, Austria, where the world champion will be determined for the third time.

Johnson's winning stunt will be posted on www.redbullcaribbean.com, where he will compete against the other Latin America and Caribbean winners at the end of March for his pass to Austria, which will be dependent on people's votes.

A world-class team of experts will be on hand to award valuable points in the aerobatics category in Austria and to ensure theofficial RBPW rules are observed at all times.