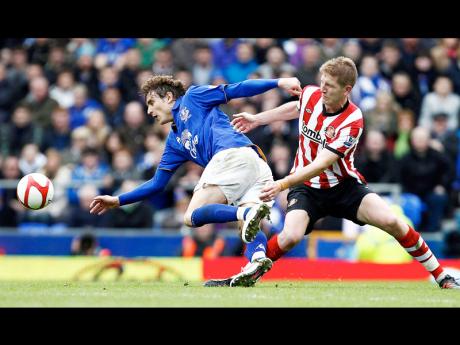 LONDON (AP):Tim Cahill secured an FA Cup replay for Everton against Sunderland after the English Premier League sides drew 1-1 in the quarter-finals yesterday.

Phil Bardsley fired Sunderland into a 12th-minute lead at Goodison Park with a long-range strike, but Cahill equalised 11 minutes later.

Nikica Jelavic's header from Leighton Baines' cross was going wide, but Cahill nodded the ball on past goalkeeper Simon Mignolet.

Everton were frustrated in their search for a winner, with Mignolet denying John Heitinga and Jelavic late on.

"The equaliser knocked us back, we lost a bit of confidence with it," Sunderland manager Martin O'Neill said. "There was a big surge from the home crowd.

"I thought the second half could have gone either way, but they pressed us more towards the end of the game. I am delighted we are still in the hat, I probably would have taken that at the start of the game."

The quarter-finals have reduced the Premier League programme this weekend - and Fulham will have wished they had not played after going down 3-0 to Swansea.

On-loan Hoffenheim midfielder Gylfi Sigurdsson scored in each half to give Swansea a third successive league win.

The Iceland midfielder nodded in the opener in the 36th after Scott Sinclair had flicked on the ball from Wayne Routledge's cross.

Sigurdsson's second goal came in the 66th after playing a one-two with Routledge.

Joe Allen wrapped up the south Wales club's victory in the 77th after Philippe Senderos inadvertently gave the ball to Sinclair.

Swansea moved up to eighth, while Fulham dropped to 11th.

West Bromwich Albion were held to a 1-1 draw by bottom-place Wigan. James McArthur put Wigan ahead at the start of the second half, but Paul Scharner equalised in the 65th.