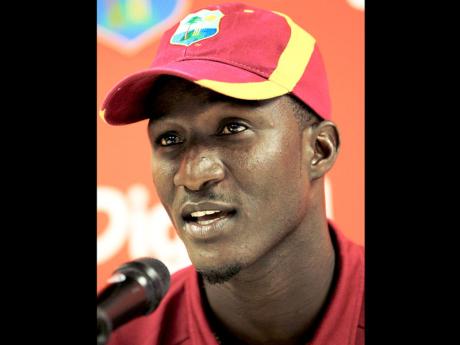 KINGSTOWN, St Vincent (CMC):West Indies captain Darren Sammy was unusually candid in his assessment of his side's performance after witnessing yet another shocking batting collapse in the opening one-day international against Australia here last Friday.

Chasing a moderate 205 for victory, West Indies were well poised at one stage at 97 for three, but lost six wickets for seven runs in the space of 28 balls, to crash to 140 all out at the Arnos Vale Stadium.

"We lost a few early wickets and then we had a partnership, but then once that partnership was broken we just lost our way in the middle.

"It is something we really have to work on and work on it very fast because come Sunday (today), we have to do battle again."

He added: "We've seen what the Australians have, nothing extraordinary, but we just have to go out there and be more responsible in our approach.

"I think we bowled well to restrict them to 200, but we didn't complete the second half of the innings. We lost a game we should have won."

The Windies bowled superbly on a tricky pitch to limit the Australians, with medium pacer Dwayne Bravo taking three for 58 and off-spinner Marlon Samuels (2-29) and pacer Kemar Roach (2-33) finishing with two wickets apiece.

Mystery off-spinner Sunil Narine bowled with great control and variation to claim one for 24 from 10 overs, a spell that put the brakes on the Aussies scoring.

In the hosts' turn at the wicket, however, Samuels stroked 35 in a 64-run, fourth-wicket stand with Bravo (32), but once both departed in the space of four balls, the innings went into terminal decline.

"I think we bowled our hearts out and fielded very well and (after) the first half of the match, we were quite happy chasing 205. We lost it there with the bat, but like I said, we've got to bounce back Sunday (today)," said Sammy, whose whirlwind 20-ball 35 at the end was in vain.

"We know St Vincent. We know how the pitch plays so we just have to go out there and be more responsible."

The ODI bowls off at the same venue here today.