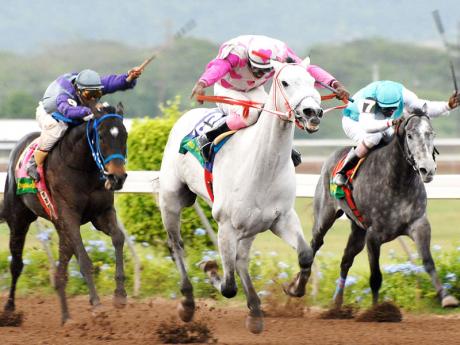 Leading jockey Dane Nelson changes his hold on ITALIANO (centre) as the grey gelding moves away from the runner-up AVENTURA (left), with Richard Mairs in the saddle and long-time leader RAINBOW MAN (Shane Ellis) to win the $1.3-million Prince Consort Stakes over 1400 metres at Caymanas Park yesterday. ITALIANO won at odds of 3-1.- Colin Hamilton/Freelance Photographer

The grey gelding ITALIANO, one of three winners for leading jockey Dane Nelson and champion trainer Wayne DaCosta, stormed through from off the pace to win the 21st running of the Prince Consort Stakes over 1400 metres at Caymanas Park yesterday.

Offering odds of 3-1 in a field of eight native bred three-year-old colts and geldings in this the final prep for the 2000 Guineas on Easter Monday (April 9), ITALIANO won by 23/4 lengths from 17-1 outsider AVENTURA. The latter finished 11/4 lengths ahead of the 8-5 second favourite, UNCLE DONNY, with champion jockey Dick Cardenas aboard.

In a somewhat eventful race, the 3-4 favourite PRINCE ANDREW under leading all-time jockey Winston Griffiths finished a floundering last after chasing the speedy RAINBOW MAN (24-1) in the backstretch.

Prior to the start, LASHING FORCE slipped up in the starting gate and had to be withdrawn. And shortly after, EASTWOOD reared in the gate and he too was a late scratch.

With RAINBOW MAN (Shane Ellis up) enjoying a clear lead into the straight ahead of PRINCE ANDREW and POTCHEEN, ITALIANO was outpaced in seventh position passing the half-mile.

However, he made smooth headway on the outside to straighten in fourth position three wide. And when Nelson asked him to run at the leader, he produced a rare turn of foot under a torrid left hand stick, sweeping past RAINBOW MAN from early in the last furlong for an emphatic win.

AVENTURA and UNCLE DONNY, who were never far off the pace, stayed on to secure the minor placings.

Given this win, Nelson said he was "confused" in deciding whether to ride ITALIANO or the stable's first string ALL CORRECT in the 2000 Guineas.

"All Correct is the proven class, but Italiano is improving by leaps and bounds. He felt 20 times better in this race than when I won the Sir Howard Stakes over six furlongs with him three weeks ago," said the jockey.

"He was tugging for his head from early today and felt really strong leaving the half-mile. He came down sharply on the outside entering the straight and I knew then it was all over," added Nelson, who also won the first race aboard 5-2 chance LUSCIOUS (made all) and the third aboard 8-1 chance DIABOLICAL KID for DaCosta as well.

By He'stherealthing out of Pik A Trix, ITALIANO is owned by Elizabeth DaCosta (the trainer's wife) and bred by Owen and Solomon Sharpe.

With Cardenas failing to ride a winner, Nelson has widened his lead to 28 - seven clear of Cardenas and six ahead of Walker.

Walker enjoyed his best day of the season, booting home GHOST RAPPER, DON GEORGE, MIRACLE STAR and NOON IT IS.