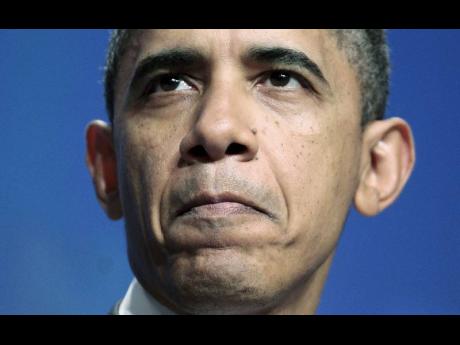 President Barack Obama is calling anew on Congress to end tax subsidies for the oil and gas industry, saying America needs to develop alternative sources of energy in the face of rising gasoline prices.

Obama said Saturday in his weekly radio and Internet address that he expected Congress to consider in the next few weeks halting $4 billion in tax subsidies, something he hasn't been able to get through Congress throughout his presidency.

He said the vote would put lawmakers on record on whether they "stand up for oil companies" or "stand up for the American people."

Industry officials and many Republicans in Congress have argued that cutting the tax breaks would lead to higher gas prices, raising costs on oil companies and affecting their investments in exploration and production. The measure is considered a long shot in Congress, given that Obama couldn't end the subsidies when Democrats controlled Congress earlier in his term.

Republican presidential candidates have accused Obama of delaying drilling for oil in the Gulf of Mexico and in a national wildlife refuge in Alaska and faulted him for not advancing the Keystone XL oil pipeline from Canada to Texas Gulf Coast refineries. They have also criticized policies pursued by the Environmental Protection Agency as inhibiting energy development.

Obama said there is no quick fix to high gas prices, but he pushed back against critics who say he is opposed to more drilling. He said the U.S. is producing more oil than at any time in the past eight years and has quadrupled the number of operating oil rigs.

"If we're truly going to make sure we're not at the mercy of spikes in gas prices every year, the answer isn't just to drill more because we're already drilling more," Obama said. He said his administration was trying to develop wind and solar power, biofuels and usher in more fuel-efficient vehicles to make the nation less dependent on oil.

In the weekly Republican address, Rep. Cory Gardner said his constituents have been hard hit by an increase in gas prices and were "fed up with the way the president is handling this issue, and rightfully so. The most forceful thing the president has done about high gas prices is try to explain that he's against them."

"After spending money we don't have on what won't work and overregulating what would is it any wonder gas prices have more than doubled on the president's watch? Make no mistake, high gas prices are a symptom of his failed 'stimulus' policies," Gardner said.

Obama is expected to keep up a drumbeat on energy this week, traveling to four states over two days to push his administration's "all of the above" energy strategy. The trip includes stops in Nevada, New Mexico, Oklahoma and Ohio.