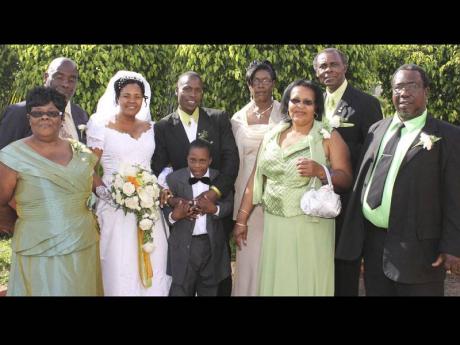 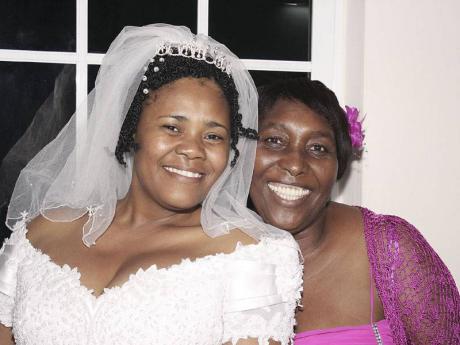 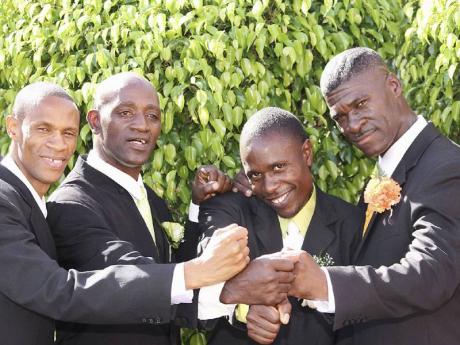 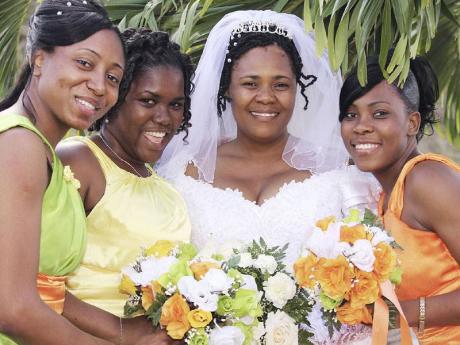 The bride, sharing the moment with her bridesmaids (from left), matron-of-honour Allisongaye Griffiths, Petro Richards (sister of groom) and Yolanda Dixon (sister of bride). - Contributed Photos 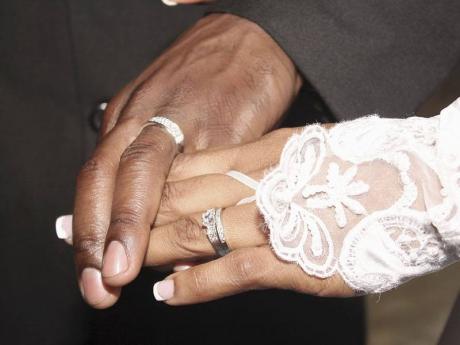 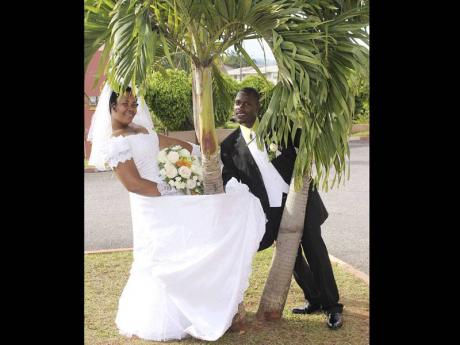 We first met at church in 2009. I was on duty as an usher when the always-smiling Wrol came strolling along. I was captivated by his smile but he nodded, smiled and went inside. A few weeks later, I went to visit a friend and we again crossed paths. We said hello and went our separate ways. Later that day my girlfriend and I decided that we would spend a few hours in the town shopping , as it was Christmas eve.

To my surprise, Wrol and a friend came along. My girlfriend formally introduced us and we enjoyed the walk into the town, going from store to store. We constantly made eye contact and I wondered, "why is this guy looking at me?" However, the night ended and we all took the same taxi home.

A few days later, my girlfriend needed help with stocktaking at the Pharmacy so I decided to assist. While there, Wrol unexpectedly showed up. Each time I looked up, he was standing there pretending not to see me. I love chocolate and later that night I felt like having a Snickers bar. Wrol overheard my conversation with my girlfriend and offered to purchase one for me but I declined, even though I really wanted it. He insisted and I kept telling him "that's okay". The evening turned into night and the night turned into morning and it was time to go home.

At home, we had housework to do, (my girlfriend and I). Shortly after, I enquired if Wrol had reached home safely as we left him at work. "Do you wish to call him?" my girlfriend asked. "I don't think so," I said. She dialled his number and after speaking with him, she handed me the phone. We spoke for a short while, then we exchanged numbers and we started to correspond and became inseparable.

On May 26, 2011, a week after I returned from a trip to Cuba, Wrol called many times in about five minutes and I became annoyed, but answered a soft "yes".

He asked if I had any plans for July 31.

Before answering, I went to check my calendar to see which Sabbath it was as Wrol loved to travel out of parish for church. Realising it was a Sunday, I responded "no" and asked "why".

I asked, "What! are you proposing to me?"

He timidly said "yes" and I asked, "Then why are you doing it over the phone?"

We became excited and he said we would talk about it later. This was completely unexpected, even though we had discussed getting married on many occasions.

Time went by and I was at home doing my regular Thursday evening laundry when Wrol stopped by before going home. He handed me my parcel of fruits. I checked it and found my favourites: corn asham, and papaya. While he surfed the Internet, I finished my laundry and went to have my fruits. He asked if wanted to have my papaya and I told him not yet, as it looked half ripe. I had everything else then took up the papaya, examined it, and noticed it had a cut to one side and asked if he bought the papaya that way. He explained that at times the papaya had to be sliced in order for it to ripen quickly.

Anyway, I started peeling the papaya, sliced it in two, then again.

As I made another incision, I saw something looking like insects in the papaya and I threw it in the bin. He asked what was inside and I told him that I was not sure. I went into the garbage to see what it was. Both of us looked keenly on the object while I tried to figure out what it was. Realising its shape, I asked with a broad smile, "What is this?" but by the time I was finished, Wrol asked the question, "Will you marry me?" Before responding, I stretched out my hand and whispered softly, "yes".

The day finally came! Princess Fiona (nickname) was surprised when her chariot arrived. A limousine! She screamed, as she was expecting another vehicle to transport her.

The parents led the way, followed by the bridal party. The bride was escorted by two proud fathers, Martin Duncombe (adopted father) and Dudley Dixon (biological father). The beaming bride looked stunning in her gorgeous off-the-shoulder bridal gown from David's Bridal. She carried a bouquet of white roses and white calla lilies by Stephen's Flower & Gifts. She glided softly up the aisle to the song, forever in love by Kenny G, played by José Carlos Oxamendi Vicet on cello.

I was very nervous walking up the isle on my father's arm, but when my beloved took my hand, I relaxed and beamed. It was the happiest moment of my life.

The ceremony was officiated by Pastors Howard Holmes, Thomas Bryan and Lovell Spence.

The reception followed at Neil's Auditorium. The hall was exquisitely decorated by Stacey Neil and her team in the couple's colours of green, orange and yellow. Jim Patterson, master of ceremonies, kept the guests entertained with his special brand of humour. Caterer was Denise Wilson and the wedding cake was created by Anthony Bowen. Photographer was Garfield Forbes.

My husband sang an original piece written just for me, titled Love is Forever. The newly-weds later enjoyed a romantic but relaxing fun-filled honeymoon at RIU, in Ocho Rios, St Ann.