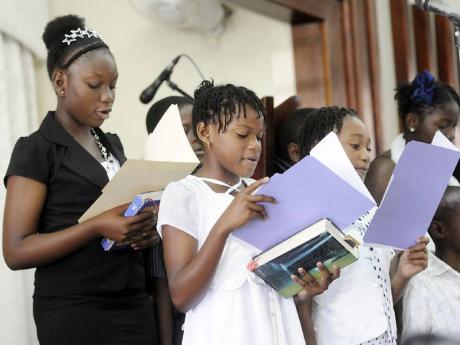 Mourners turned out in their hundreds to bid farewell to the late Barbara Williams during a thanksgiving service yesterday at the Bethel Baptist Church in St Andrew.

Although the occasion was sad, laughter was heard throughout the congregation at various points as friends and family members spoke of their memories with the righteous woman they could always approach for advice no matter what the situation was.

Grace Salmon, a co-worker of Williams at The Gleaner Company, was the first to pay tribute.

"She was a dedicated and committed co-worker who took pride in whatever she did, set standards and was worthy to be emulated," Salmon said. "Every interaction with her was a pleasure."

Williams was also described as a firm believer in God.

"Barbara made people want to know the God who strengthened her. The Bible was also her point of reference in all her endeavours. She was amicable as kindness was seen in her self-image; it was inspiring to be that obedient to the Lord's Word," said Denise Forrest.

Williams had a special place in her heart for children, said Forrest, who added that those who interacted with her called her 'Mother' or 'Aunty Barbara'.

This was reflected in a tribute from the children of the Ambrook Lane Sunday school.

"She always encouraged us to do our best, checking on us to see if we are safe and telling us keep working hard and you will succeed. She was full of love and always concerned about our needs," they said.

Williams, who was 64 years old, had been ailing for some time before she passed away on March 1. She started working at The Gleaner in June 1971 and served the company until last February.