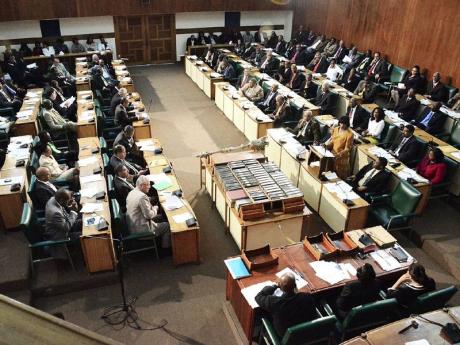 Parliamentarians bow their heads in prayer during the opening of the new session at Gordon House on Tuesday, January 17. - file

IT HAS been two months since the Portia Simpson Miller administration walked up Duke Street into Parliament to form the Government.

And since being sworn in, we have noticed that the Government has not tabled a single bill in either House of Parliament for consideration, debate and passage. There have been seven sittings of the House under Phillip Paulwell as leader of government business, and to date, we don't get the sense that the Government has a legislative agenda. The people's business has just been limping along.

The Gavel accepts that a new administration will take some time to find its footing. In the case of Parliament, the new Government would need time to review existing draft bills before they are tabled. We submit, however, that seven sittings is an awful lot of time to have had absolutely no bills in the House.

One wonders whether Prime Minister Portia Simpson Miller's "on to the work" charge to members of her Cabinet does not apply to the manner in which they approach parliamentary business.

In Opposition, the People's National Party parliamentary group was critical of the Government's legislative agenda. But since taking over, the Simpson Miller Government, with Paulwell as House leader, has merely used the Parliament to deliver statements by ministers, answer questions and debate motions. There has been absolutely no movement on bills.

Peter Bunting, the national security minister, has said the anti-gang legislation that was tabled in the House by the former administration was deficient and could not have been returned to the Order Paper in the way in which it was found.

Bunting has said it would take at least two months to have a proper bill placed before the House. We understand and appreciate the time and care the minister is taking with that bill. Nonetheless, one would have hoped that the Simpson Miller administration would have moved post haste to get some low-hanging bills out of the way.

One would have thought that by now the special prosecutor bill would have been tabled. There was a working draft for the special prosecution bill. One will recall that the proposed bill encountered problems in the House. In seeking to resolve the issues with the bill, the members of the House resolved itself into a committee and considered the bills clause by clause. Following that exercise, several amendments were suggested, and a draft was circulated in June 2011.

The Golding and Holness administrations failed to act further on the special prosecutor bill; and to date we have seen no movement from the Simpson Miller government on that anti-corruption bill.

In the last Parliament, a bill containing proposals for the review of Jamaica's building code was tabled. The bill is intended to repeal the Kingston and St Andrew Building Act and the Parish Councils Building Act and make new provisions for the regulation of the building industry; to facilitate the adoption and efficient application of national building standards, to be called the National Building Code of Jamaica, for ensuring safety in the building environment, enhancing amenities and promoting sustainable development.

A committee of the House was appointed to sit jointly to consider the bill. The last Government failed to make any meaningful move on it, and we have seen no indication of the new Government seemingly wanting to address it with the urgency it deserves.