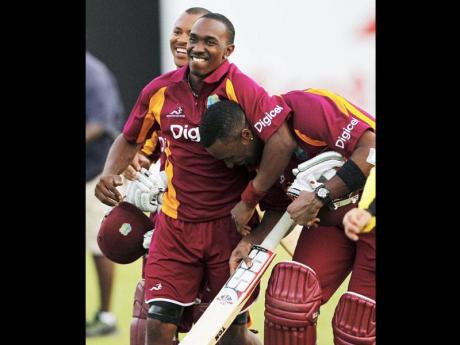 West Indies broke a five-year winless drought against Australia, when they held their nerves to seal the second one-day international in a tense finish at Arnos Vale yesterday.

Set a modest 158 for victory after rain had earlier reduced the game to 40 overs per side, the Windies recovered from losing opener Kieran Powell to the first ball of the innings, to reach their target with 10 balls to spare and snatch a five-wicket victory under the Duckworth/Lewis Method.

The win was engineered by the enigmatic Kieron Pollard, who blasted four sixes in an unbeaten 47 from 61 balls.

His 64-run, fifth wicket stand with fellow Trinidadian Dwayne Bravo proved invaluable, after the West Indies had lost two quick wickets for seven runs to slump to 74 for four in the 19th over.

Bravo scored 30 from 49 balls, but even after he was run out with victory in sight, there was no customary collapse as Carlton Baugh entered to lash two fours and a six in an unbeaten 18 off 17 balls, to see the Windies home.

In fact, it was the diminutive Jamaican who sealed the victory, launching left-arm spinner Xavier Doherty over the ropes at deep midwicket, to send the capacity crowd into frenzied celebration.

The victory, the Windies' first over Australia since the 2006 Champions Trophy, drew them level in the five-match series following their disappointing 64-run loss in the first ODI on Friday.

After a total of 2 1/2 hours play was lost to rain in the morning, Australia's batsmen struggled on the dodgy Arnos Vale surface, with a few getting starts but failing to carry on.

Pacer Kemar Roach (2-23) bowled with pace and accuracy to claim the first two wickets to fall - David Warner for 13 and Peter Forrest without scoring - as Australia slipped to 19 for two in the seventh over.

Watson clipped a catch to substitute Devendra Bishoo at short mid-wicket off Sammy at 46 for three in the 14th over, but the Hussey brothers, Mike and David, added 31 for the fourth wicket.

With the Aussies tottering on 121 for six in the 34th over, Narine then ran through the lower order.

West Indies were off to the worst possible start when Powell offered no shot to pacer Brett Lee and was palpably lbw.

Aggressive opener Johnson Charles and Marlon Samuels pulled the Windies around with a 42-run second wicket stand, however.

Charles faced 37 balls and stroked two fours and a mighty six over long-on off Lee, while Samuels got 20 from 37 balls before he was yorked by Watson in the 11th over.

Charles and Darren Bravo (16) had posted 25 for the third wicket when Bravo refused a second run and left his right-handed partner stranded mid-pitch in the 16th over.

With seven runs added, Bravo dragged on to Doherty at 74 for four.

His older brother, Dwayne joined forces with Pollard to reignite the innings. Pollard was the aggressor, twice clearing the boundaries at midwicket and long off.

Even when Bravo departed, Baugh kept his cool in a 25-run, sixth wicket partnership off 30 balls with Pollard, that saw the Windies home.

X Doherty not out 0

K Pollard not out 47

Did not bat: A Russell,D Sammy, S Narine, K Roach.