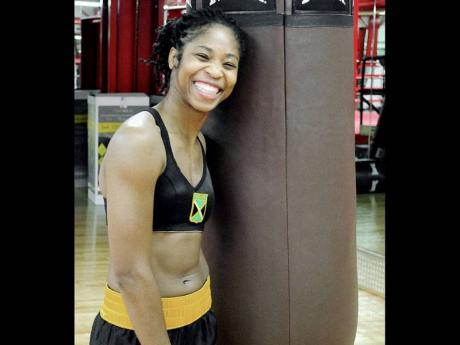 "I am thrilled that I was able to retain my title in fine style and I really want to fight in Jamaica next," Jamaica's World Boxing Council (WBC) super bantamweight champion, Alicia Ashley, told The Gleaner yesterday, after successfully defending her title on Saturday night in Mexico City, Mexico, against Mexican challenger Maria Elena Villalobo.

In a scintillating performance, Ashley completely dominated her opponent to win by a clear margin on all the scorecards. The judges scored it 99-92, 98-92 and 99-91, which meant that Ashley won nine rounds on one scorecard and eight rounds on the other two.

"This is my first contribution to Jamaica's 50th Independence anniversary celebrations and I hope there will be at least one more," Ashley stated.

Ashley told The Gleaner before the fight that she was well prepared for the challenge and that because she had arrived in Mexico early, she had acclimatised to the high altitude; and had no doubt that she would be able to use her speed to good advantage, which she did.

Living up to her name

A large crowd that included Jamaica's ambassador to Mexico, Delrose Montaque, and her delegation, saw Ashley put on a boxing clinic. She was agile, she was hard-hitting and lived up to her nickname 'Slick'.

An elated member of her entourage said gleefully yesterday that it would not be an exaggeration to say that "like Muhammad Ali, she floated like a butterfly and stung like a bee".

Realising how high he had set the bar with this statement, he backed off somewhat shortly afterwards and said "well maybe not quite like Ali, but you get the message".

Her performance, against a tough Mexican challenger in Mexico, made it even more exciting and rewarding for the Jamaica-born boxer, who now lives in Brooklyn, New York and trains at the world famous Gleason Gym.

She was in Jamaica recently for the RJR Sportsman and Sportswoman of the Year Awards ceremony, at which she was a nominee.

Ashley dominated her opponent from the opening round. She put her entire repertoire of jabs, hooks and uppercuts on display and her opponent was never able to find an answer to the constant barrage of punches that were repeatedly thrown at her.