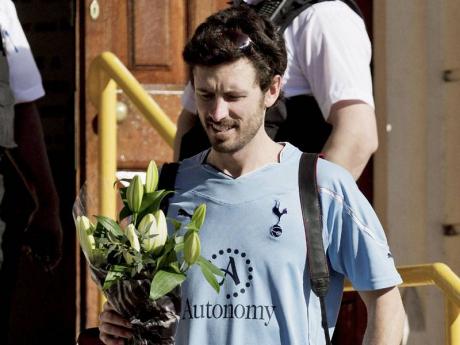 A Tottenham Hotspur fan carries flowers for Bolton's Fabrice Muamba outside the London Chest Hospital in London, where Muamba is being treated, yesterday. 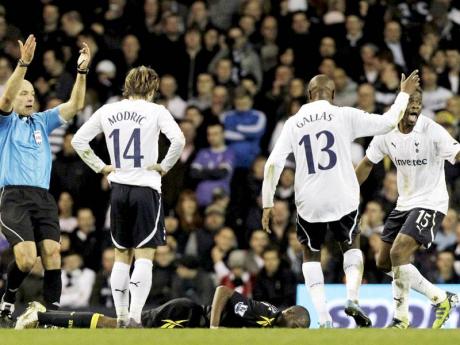 Bolton Wanderers' Fabrice Muamba lies on the pitch after collapsing before being stretchered off as Tottenham Hotspur's Louis Saha (right) and referee Howard Webb (left), Lukas Modric (second left) and William Gallas react for medical staff to come onto the pitch during the English FA Cup quarter-final football match between Tottenham Hotspur and Bolton Wanderers at White Hart Lane stadium in London, Saturday. 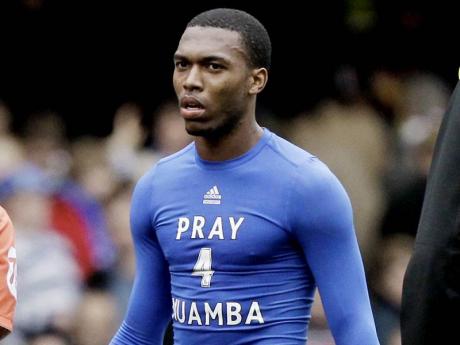 Chelsea's Daniel Sturridge wears an undershirt revealing a tribute to his former Bolton Wanderers loan period teammate Fabrice Muamba who is critically ill in hospital, after the final whistle of the English FA Cup quarter-final football match between Leicester City and Chelsea at Stamford Bridge stadium in London yesterday. 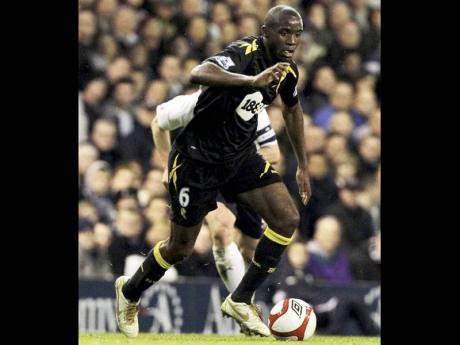 The 23-year-old player's heart only "started working again" at a London hospital Saturday night, Bolton said in a statement yesterday.

The former England under-21 player fell face down near midfield during Saturday's match and medics rushed out to begin resuscitating him.

Releasing more details of Muamba's condition, Bolton said that he remained "in a critical condition" in intensive care at the London Chest Hospital's heart attack unit.

"Fabrice received prolonged resuscitation at the ground and on route to the London Chest Hospital, where his heart eventually started working," Bolton said in a joint statement with the hospital. "As is normal medical practice, Fabrice remains anesthetised in intensive care and will be for at least 24 hours. His condition continues to be closely monitored by the cardiac specialists at the hospital."

Bolton manager Owen Coyle returned to the east London hospital yesterday morning after rushing there with Muamba, who has played 33 times for England's under-21 squad.

"Fabrice's family have asked me to pass on their thanks for the many, many kind messages of support from not only Bolton fans, but also fans from clubs across the country and abroad," Coyle said in a statement. "All our thoughts and prayers are for Fabrice and his family at this time."

Bolton's game against Aston Villa in the Premier League tomorrow has been postponed. The game Saturday was called off.

"I have worked with Fabrice as a player at Birmingham and he has always been a terrific lad, nothing other than the perfect professional," Villa manager Alex McLeish said. "He trained every day the way he went to play in games, full of intensity and enthusiasm. He is a manager's dream in terms of his commitment to the team. ... My heart goes out to his family and it is overwhelming to think what they are going through right now.

"The massive response throughout Europe and the world of football underlines how everybody has been touched by this tragic development and I pray that Fabrice is able to pull through."

Muamba fell to the field in the 41st minute of the match, prompting Coyle to shout from the touchline: "He's just collapsed."

Tottenham players William Gallas and Louis Saha, along with referee Howard Webb, immediately beckoned for medical support as the quarter-final was stopped and live television coverage turned away from the scene.

Some distressed players appeared to be praying and tearful as fans chanted Muamba's name between periods of complete silence at White Hart Lane.

The crowd rose in applause as Muamba was carried off on a stretcher wearing an oxygen mask, while still having his chest pumped.

"It was the right decision to abandon the game - everybody was in a state of shock and it wouldn't have been right to carry on," Tottenham manager Harry Redknapp said yesterday. "Football is the last thing on anyone's mind when an awful situation such as this happens. All we are thinking about now is Fabrice and his family."

Tottenham chairman Daniel Levy said the club was "immensely proud and grateful to the medical teams".

"Our thanks also to both sets of fans for their support and behaviour. Too often we read the negatives about football and yet last night, at a time of intense emergency and uncertainty, we saw the true humanity and empathy of the footballing family," Levy said.

There was an outpouring of support for the player throughout the sports world.

"Shocked to hear about Fabrice Muamba," FIFA President Sepp Blatter said on Twitter. "My thoughts are with him and his family, his club & loved ones at this difficult time."