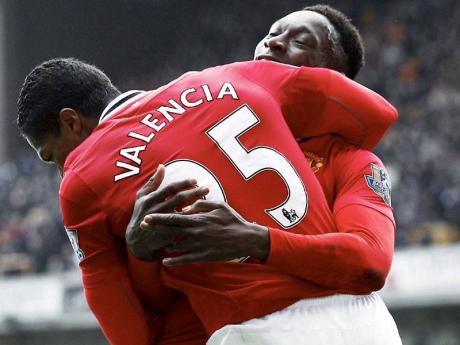 The Mexico striker's second-half double rounded off a fifth straight league win for the champions that was started by Jonny Evans netting his first United goal in the 21st minute.

After Wolves defender Ronald Zubar was dismissed in the 40th minute for a second yellow card, Antonio Valencia and Danny Welbeck extended United's lead before the break.

Hernandez made it 4-0 in the 56th with a free header from Da Silva's chip into the box and netted again five minutes later after Valencia and Welbeck had combined.

United are four points clear of Manchester City, which have a game in hand. The Manchester rivals were both knocked out of the Europa League on Thursday.

"It was a great result for us, Thursday (against Athletic Bilbao) was a disappointing night for us all," United striker Wayne Rooney said. "We knew it was important we bounced back and bounced back well. Over the last few years coming here has been a difficult game, so to come away with three points so convincingly is a great day for us.

"The most important goal away from home is the first one to quiet the home fans down and then they had a man sent off and we took advantage of that, got a goal quickly after that and from there the game was dead really."

United could even afford the luxury of a rare blank day in front of goal for Rooney, who was a constant threat.

In contrast, Wolves have now leaked 19 goals in their last five games - 14 in four under caretaker manager Terry Connor - and dropped to the bottom of the standings yesterday.