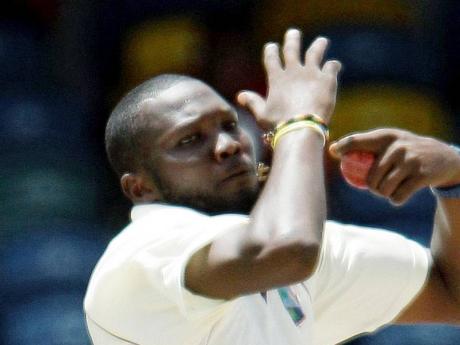 Barbados enhanced their chances of a semi-final place in the West Indies Cricket Board (WICB) Regional Four-day Tournament first-class cricket championship with a resounding innings and seven runs win over the Leeward Islands, with a day and two-and-a-half sessions remaining in the sixth round affair yesterday.

Beleaguered Leeward Islands, starting the third day on 121 for five with a first innings deficit of 179, were bowled out for 172 off 53.1 overs in their second innings - roughly one hour before lunch at Kensington Oval.

They were undone by a combination of pace and spin from Christopher Jordan and Sulieman Benn, as the last five wickets dramatically tumbled for three runs in four overs after overnight pair Devon Thomas and Hayden Walsh Jr had extended their sixth wicket partnership to 77.

Left-armer Benn, again enjoying his work from the Malcolm Marshall end at the south, took five for 53 off 17 overs for a match haul of nine for 70 off 27 overs, which earned him the Man-of-the-Match award.

Jordan, in his last match of the season before returning to England later this week to play for Surrey in the County Championship, picked up four for 41 off 14.1 overs.

Left-hander Walsh, who resumed on 14, played fairly confidently for the first 37 minutes yesterday before clipping Jordan into the hands of Kyle Hope at forward square leg after scoring 38 to make it 169 for six.

Walsh was at the crease for 71 minutes, faced 66 balls and hit seven boundaries.

Without addition, Thomas, who started the day on 26, was caught at mid-off by Omar Phillips from a drive off Jordan for 47. His innings lasted for 102 minutes and contained five fours and two sixes off 95 deliveries.

Then Justin Athanaze, swinging outside the off stump, was swiftly stumped by Shane Dowrich off Benn for nought and left-hander Lionel Baker was bowled by a yorker from Jordan for two, leaving Anthony Martin not out on nought as the match ended at 11.02 a.m.

The top score came from left-handed opener Austin Richards, who made 51 before he was third out on Saturday evening.

The victory was Barbados' third, lifting them to 36 points, while in losing their fourth match, the Leewards remain rooted at the bottom of the table with Combined Campuses & Colleges on 12 points.