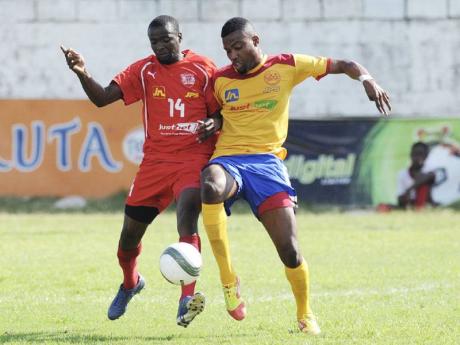 Boys' Town and Village United emerged from their encounter in the 30th round of the Red Stripe Premier League (RSPL) feeling dissatisfied after failing to achieve maximum points from yesterday's fixture at Collie Smith Drive, as they played to a goalless draw.

Village are in an even more precarious position as they are languishing at the foot of the 12-team standings on 23 points and saw ninth-place Highgate United (29) move even further away after clipping 11th-place Reno (25) 1-0.

"With the situation that this team is in, one point is never enough from this game, because we got chances to have put the game away and come away with three points. But unfortunately our finishing wasn't intact today," Villages assistant coach, Rohan Robinson, supplied.

Despite having amassed 27 points less than their opponents and being 11 places worse off, Village showed no signs of inferiority on the field and created an equal number of goalscoring opportunities.

Boys' Town did not appear settled for the duration of the game, as they rushed their passes and were a shadow of the team that inflicted Portmore's first home defeat of the season last week by a 4-2 margin.

"They (Boys' town) looked a bit listless today and that is always the apprehension you have after you come off a high, with the performance we had in Portmore (and now) playing against a team that is in the lower part of the league," Boys' Town head coach, Andrew Price, reasoned.

"Even with that effort we still got some opportunities to put away the game, but it wasn't to be today," he added.

Village came closest to scoring in the first half when their leading scorer, Dino Williams, easily got around Boys' Town's Daemion Benjamin on his way into the area, but from an angle could only find the side netting.

Boys' Town's best chance in the opening stanza fell to Benjamin, but he was unable to keep his unchallenged header down from four yards out.

Boys' Town's Shane Edwards struck the crossbar in the 60th minute, after being allowed to turn in the 18-yards box.

The Red Brigade did manage to get the ball in the back of the net in the 67th minute, when captain Michael Campbell's deflected shot was fired home by Jermaine Allen. But Campbell was adjudged to have been offside when he received the pass.