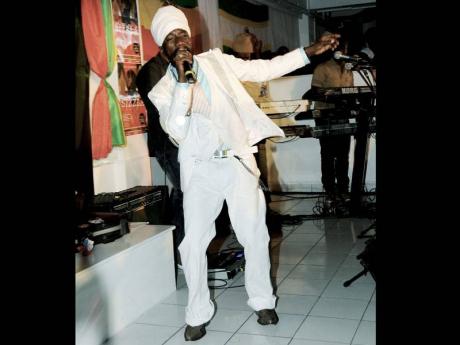 It seems Sizzla has fully recuperated from injuries related to a bike accident last year, as the artiste was in his element when he performed at Sizzla Unplugged and Acoustics that was held at Club Privilege, New Kingston, on Sunday.

King Tafari sound system kept the patrons somewhat entertained with soulful reggae and R&B while they waited for the show to begin.

After a lengthy welcome from host Emprezz, Sizzla walked to the stage, followed by a large group. He took the stage with Show Us The Way and had the audience singing along as he did Holding Firm.

Although crammed together after being called closer to the small, low stage by the host, their attention did not wander as Sizzla glided from Simplicity to Words Of Devine. Even when he was giving instructions to his band, Sizzla did it in an effortless manner - the audience never distracted.

Students from Papine High School later joined him onstage and did a negro spiritual before providing background vocals.

After jumping for most of the night, the patrons still had enough energy to express appreciation for Solid As A Rock. They loved the song in its original form and seemed to love it even more, after Sizzla did a rock-flavoured version.

At intervals, Sizzla also answered questions about himself and the Sizzla Youth Foundation, to which proceeds from the event will be going.

"I registered my foundation to train and develop the youth, not just in Jamaica but worldwide. We need to help the youth more," he said, as he asked patrons to contribute to the foundation, having shared earlier that Popcaan had donated $50,000.

He also used the time to 'big up' incarcerated artistes like Buju Banton, Vybz Kartel and Ninja Man. This was followed by Dry Cry that seemed to be one of the favourites for the night.

"A gweh plug out Babylon outta black people life," he said, before doing Babylon A Listen.

Joined by Sly & Robbie, Sizzla insisted that they play the Taxi Gang rhythm. At this point, he was joined by Jimmy Riley, Lukie D and Shaggy, who did songs on that rhythm.

Answering more questions, Sizzla also took the opportunity to 'bun out' men wearing tight pants, shaving eyebrows, and those wearing their pants below their waists.

As one of the scheduled acts, Jessica Yap was truly entertaining. The young violinist showed class and professionalism when she played alongside the band. She was especially impressive when the band played lower and patrons were able to hear her instrument clearly. There was a lot of love onstage when Sizzla hugged his mother, who he referred to as 'Mama Lou' while singing Thank You Mama.

After the violinist's exit, Sizzla continued to blaze with songs Rise To The Occasion, Be Strong and Taking Over. Shortly after, Popcaan also had a cameo with songs like Gangsta City and Dream.

Making up for the show's late start with his classics, Sizzla seemed as if he was doused with kerosene, as he was on fire and the energy was high. Patrons jumped and gave endless 'forwards' and 'gun salutes' when he did fast-paced songs like Karate, No Way and Give It To Dem.

"Bun mi a bun fire now," he said, before doing a mix of Free Me and Buju Banton's Boom Bye Bye.

After much jumping, he slowed the pace with Take Myself Away and Divide And Rule. He brought a rapper onstage and also did a bit of rapping before thanking the patrons for attending.